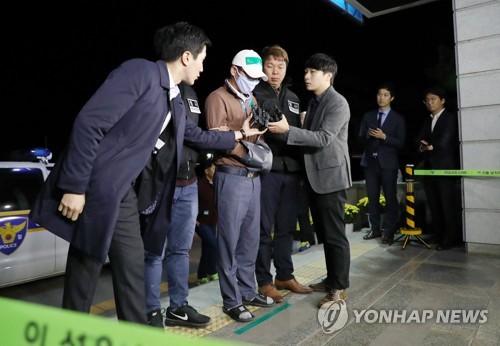 YANGPYEONG, Oct. 27 (Korea Bizwire) — A suspect in the murder of NCsoft President Yoon Song-yee’s father admitted to killing the 68-year-old man Friday, a day after he was found dead.

Police in Yangpyeong, 55 kilometers east of Seoul, said the suspect, a 41-year-old man surnamed Heo, confessed to killing Yoon’s father over a parking dispute in Yangpyeong.

Heo told police that he was not in his right mind when it happened, and he didn’t even know if the victim was alive or not.

Police don’t believe Heo’s confession is reliable, and they will restart their investigation later Friday.

Police found three external wounds on the neck of Yoon’s father, while his Mercedes was found about 5 kilometers away from his Yangpyeong home.

Heo, who was caught in Imsil, 300 kilometers south of the capital, on Thursday afternoon, at first agreed to overnight questioning but confessed to the killing after about an hour into the session and refused further probing, police said.

Police said Heo is in real estate consulting business, which they believe is connected with home construction near the late Yoon’s residence. They’re trying to identify any dispute between Heo and Yoon over the construction.

Yoon Song-yee is president of South Korea’s NCsoft, one of the world’s largest online game companies. Known as a science prodigy, she graduated from the Korea Advanced Institute of Science and Technology and earned a doctorate in artificial intelligence from the Massachusetts Institute of Technology. She is married to Kim Taek-jin, CEO and founder of NCsoft.