“Turkish men are good to their women. There is no such thing as two timing. There is no concept of cheating in Turkey.” (Remarks in Non-Summit aired in July this year)

“I am well aware why people are so angry about me. Quite contrary to my usual conservative remarks on TV, people may feel betrayed that the real me falls far short of the TV image as revealed by the recent Internet posting.”

“Just like any other young unmarried men and women I often was involved in relationships with strangers on the Internet and I talked to some of them with romantic terms. So many Korean people showed me kindness and I took it for granted and caused misunderstanding unknowingly. From this incident, I realized once again how important the love shown by the fans to me is. I am so sorry I couldn’t live up to the expectations and I apologize deeply to those hurt by my indiscretion.” 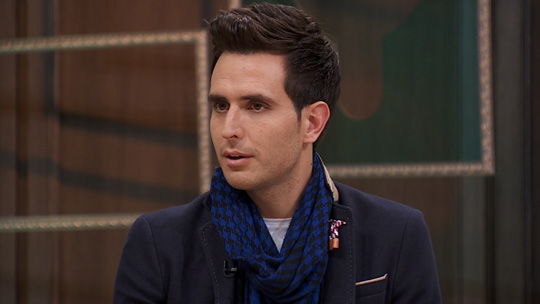 Enes Kaya was known affectionately as a “Confucian scholar from Turkey” for his extremely conservative remarks when it comes to moral questions. (image: JTBC)

SEOUL, Dec. 7 (Korea Bizwire) – The whole Korea is abuzz with a controversy surrounding Enes Kaya and his pretense as a bachelor although he was married with a child. He gained national fame by appearing on a talk show program Non-Summit on a cable TV channel.

He was known affectionately as a “Confucian scholar from Turkey” for his extremely conservative remarks when it comes to moral questions. Still it was recently revealed that he has been in contact with numerous women and involved with romantic relationships with some of them.

He came to Korea in 2002 right after graduating from high school in Turkey. He began appearing on Korean TV upon recommendation of an American friend at college. Currently he is a regular panelist in Non-Summit and Let’s Go to School both on JTBC-TV. In 2011, he even appeared in a movie Haunters.

The allegation of Kaya’s infidelity was raised by a woman who alleged that she met him on an online forum. The woman claimed Kaya met several women pretending to be a bachelor even though he was married.

The voice files and KakaoTalk screen capture images revealed by the woman were too vivid to be believed as fabricated. The woman even maintained that he kept contact with her while his wife was pregnant and was even more forthcoming.

As the scandal spreads widely, even KoreZin, the Turkish magazine reporting on Korean pop culture, recounted the story on December 2 for which Turkish readers expressed disappointment and embarrassment.

In the end, Kaya decided to stop appearing on the weekly program and held a press conference in which he released a long statement apologizing for what happened. To this, however, most Internet users were not swayed easily, commenting, “It seems apology was too late,” “His excuses are too facile,” “There is no heart-felt apology.”

Enes Kaya and his legal counsel said he would respond sternly to any attempt to spread false rumors all the while he will accept all the criticisms on his behavior with humility.