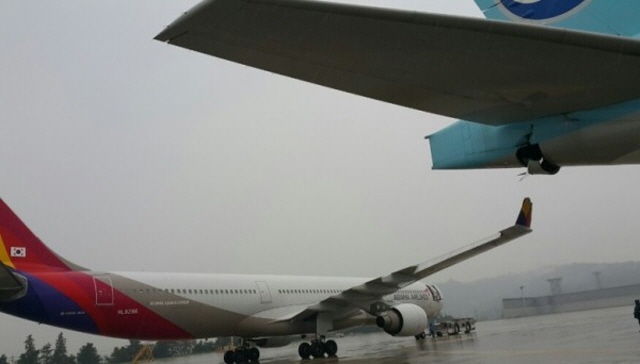 The photo shows the damaged tail of a Korean Air airplane, after a collision with an Asiana Airlines plane in the apron of the Gimpo International Airport in western Seoul on June 26, 2018. (image: Yonhap)

SEOUL, Jun. 26 (Korea Bizwire) — Two airplanes collided at an airport in Gimpo in western Seoul, causing damage to part of the jets and a delay in takeoff, authorities said Tuesday.

A Boeing 777 Korean Air plane hit its tail against a wing of an Airbus 330 Asiana Airlines plane in the apron of the International Terminal of the Gimpo International Airport at around 8 a.m., according to the authorities.

No passengers were aboard either of the planes, they said. There were two mechanic staff on each and neither of them were hurt.

The accident caused damage to part of the planes and about four-hour delays in their takeoffs. The Korean Air plane was bound for Osaka and the Asiana Airline flight was set to head to Beijing.

Airport authorities said they are looking into the exact cause of the accident, including possible careless handling of the towing vehicles that were moving the planes.