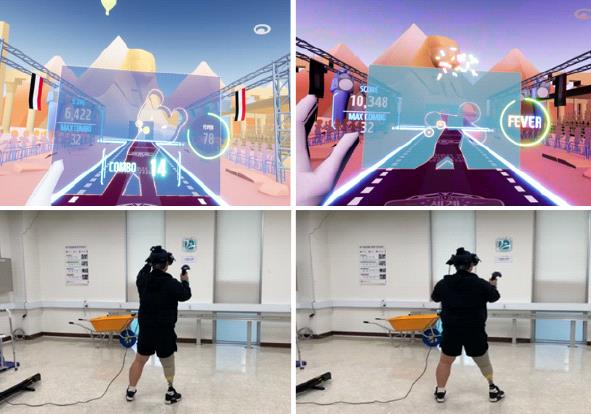 SEOUL, Dec. 14 (Korea Bizwire) — A recent survey showed that virtual reality (VR) games are an effective exercise tool for transtibial amputees who have difficulty working up a sweat when they exercise.

A research team from the Korea Orthopedics & Rehabilitation Engineering Center, which operates under the umbrella of the Korea Workers’ Compensation and Welfare Service, recently published an academic paper that analyzed the impact that games can have on the rehabilitation of the disabled.

The research team carried out an experiment with three men with transtibial amputations and three women with no disabilities. The participants exercised for 10 minutes a day, for a total of 10 times during the two week study period.

The VR game that was used for the rehabilitation exercise was a locally made game in which players have to move their full body to fit through holes in walls that are moving towards them.

To assess the impact of this game on physical capabilities, the research team measured the level of proprioception, balance, agility, and heart rate.

After exercising, the players showed improvements in the level of proprioception, balance and agility compared to before.

Their heart rate also increased by 75 percent on average, indicating that the VR games helped them exercise at a mid-strength level.

“In general, it’s not easy for people with transtibial amputations to exercise while maintaining a high heart rate. This is because it’s difficult for them to walk fast with prosthetic limbs,” the research team said.

“The VR game, however, helped them experience rapid breathing and sweating similar to high intensity exercise. The VR game also achieved a high interest satisfaction rate among the participants.”