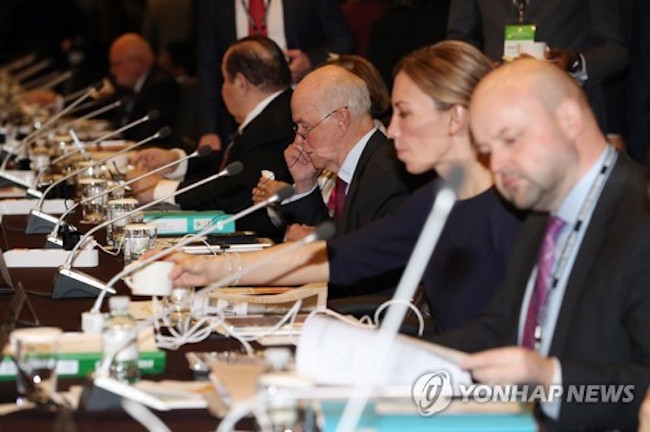 The World Anti-Doping Agency (WADA) decided not to reinstate Russia’s anti-doping body on Thursday after rejecting its appeal. (Image: Yonhap)

The WADA Foundation Board endorsed independent Compliance Review Committee (CRC)’s recommendation of not reinstating the Russian Anti-Doping Agency (RUSADA) at its meeting in Seoul. The CRC recognized that the RUSADA is still “non-compliant” with the international anti-doping code.

The decision from the 38-member board, WADA’s supreme decision-making body, will likely pressure the International Olympic Committee (IOC) to ban Russia from competing at the 2018 PyeongChang Winter Games in South Korea.

The IOC is scheduled to make its decision on Russia next month at its executive board meeting in Lausanne, Switzerland. Countries and sports federations are required to be compliant with the WADA Code to be eligible for the Olympic Games.

The WADA Foundation Board ruled that the RUSADA still failed to meet two requirements in “Roadmap to Code Compliance,” which was set to restore Russia’s anti-doping programs following its investigation.

One of the conditions was Russia accepting the findings of the “McLaren report,” which showed that more than 1,000 Russian athletes were involved in a large-scale systematic doping program over five years. Another was Russia allowing anti-doping investigators access to urine samples collected during the time of cheating that are now sealed in an anti-doping laboratory in Moscow.

Before the WADA members were about to vote on the CRC’s recommendation, Russian sports minister Pavel Kolobkov admitted that the anti-doping system in his country had failed in the past, but denied there was a national doping scheme. He said that the findings from the McLaren report are inconsistent and controversial.

Kolobkov also claimed that the mishaps have nothing do with today’s RUSADA, and such allegations are “artificial obstacles for political reasons.”

Alexander Zhukov, the head of Russia’s Olympic committee, said RUSADA is now a new independent organization and emphasized that it has been in compliance with the WADA Code for the last two years. He claimed that clean Russian athletes need to participate in the upcoming Winter Games.