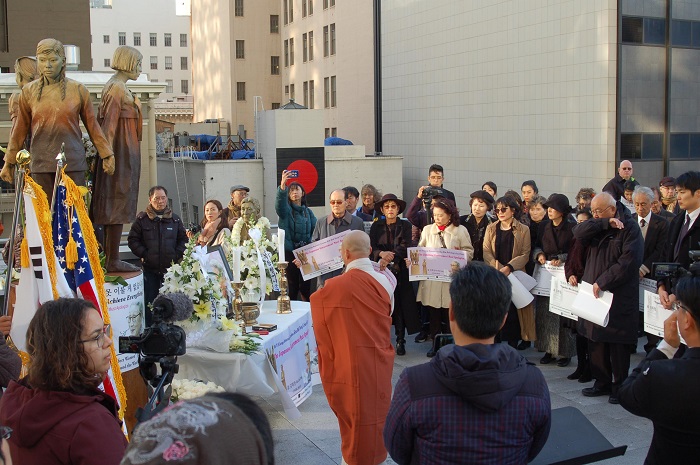 On Sunday, a memorial service for Kim was held in St. Mary’s Square in San Francisco, where a statue to symbolize Japanese military sexual slavery was first built.

During the memorial service, people read speeches of condolence and chanted a slogan together. The slogan read “There is nothing we can’t accomplish if we are together.”

Furthermore, they called on the Japanese government to apologize to victims.

More than 70 people including Koreans, Chinese and Japanese came together in front of the library where a statue symbolizing peace stands.

A winter storm swept through California over the weekend, but it did not stop the participants from paying tribute to Kim.

Kim Bok-dong passed away at Sinchon Severance Hospital at the age of 93 on January 28, and her funeral ceremony was held in front of the former Japanese Embassy on February 1.

She attended the World Human Rights Conference in Vienna, Austria in 1993, testifying and exposing Japanese military sexual slavery to the world, and became a symbol of peace ever since then.