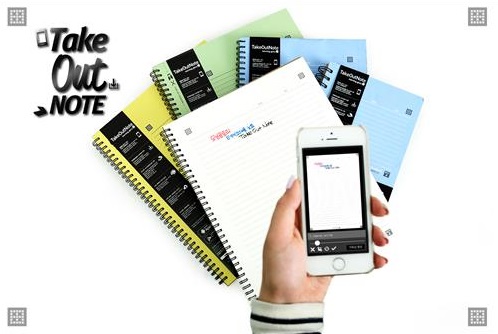 The ‘Take out’ series expanded its products to notebooks, memo pads and schedulers. (image: Yonhap)

SEOUL, July 27 (Korea Bizwire) – Domestic stationary companies are seeking ways to survive in a competitive marketplace that is shrinking with the increasing prevalence of ‘smart devices’ and the surge in competition from foreign stationary brands.

According to industry watchers, Morning Glory, one of the major domestic stationary brands, launched a device named ‘Take out Note’ that scans written memos to letters and images that can be shared online, and has received positive reviews from users thus far. The new device is an upgraded version of their key product, the traditional paper notebook, which gained explosive popularity among college students. Just a month after its release, the first 20,000 were sold out.

The ‘Take out’ series expanded its products to notebooks, memo pads and schedulers. This resulted in a 33 percent increase in sales, when comparing sales from October 2014 to March 2015 to sales for the six previous months (April 2014 to September 2014).

In addition, the company is broadening its product line to include everyday items like bags for smart devices, outdoor padded jackets, and bags for laptops.

Morning Glory estimated that sales of everyday items will increase from last year’s 18 percent to 20 percent this year.

Munhwa Pencils set out to exploit the industrial marking pen market ever since sales of pencils started to drop due to the increasing popularity of smart devices and the low birth rate.

In 2011, they released a marker that covers stains between bathroom or kitchen tiles, and started to promote the product aggressively.

Since they were first manufactured in 1987, the supply of ‘paint markers’ used at shipbuilding yards and construction sites has increased. Now, sales of industrial marking pens have reached 40 percent of the company’s total sales, bringing in more than twice as much revenue as pencils (15 percent).

Munhwa Pencils officials say that during the past five years, sales of stationary products have decreased by 10 percent each year. They state their future ambition. “We plan to expand our market to the automobile industry in the long run with eco-friendly paint markers.”

Dong-ah Pencils took their eyes abroad, exporting their products to 70 different countries including those in South East Asia and North America. Officials comment that their products are sometimes rejected by several general stores and stationary stores in the domestic market, but are popular in South East Asia and Europe because of their cheap prices and good quality.

Monami was a pioneer in the marking pen field with their ‘Skin Liner’ medical marking pen and ‘between the tile’ marker. They also established a line of high-end pens called Monami 153 in May 2014. Monami also plans to manufacture fountain pens later this year.

Industry representatives state their positive attitude towards the future. “We are finding our way through the flood of foreign products. Some of the new items are receiving enthusiastic responses. We anticipate that circumstances will get better.”