SEOUL, Feb. 23 (Korea Bizwire) – Against Japan’s territorial claim to Dokdo, South Korea’s easternmost islets in the East Sea, a video news clip was released on Youtube disclosing the tragic extinction of sea lions around the island by Japanese fishermen.

The second episode of Dokdo News titled “Truth of Disappeared Gangchi (Sea Lion)” counters the long laid claims of Japan over the islets one by one. Seo Kyung-duk, a well-known activist professor at Sungshin Women’s University, produced the video that also features narration from actor Cho Jae-hyun. 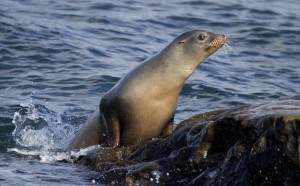 The seven-minute video clip was made to object to Japan’s Youtube video “Island Where Mechi (Sea Lions) Were Living” which falsely illustrates the coexistence of Japanese fishermen and Dokdo sea lions. Also, it was a form of protest against the so-called “Takeshima Day,” which Japan’s Shimane Prefecture commemorates annually on February 22.

Professor Seo said, “Historically, geographically and in international law, Dokdo is naturally Korea’s territory. However, I produced the video to show why Japan’s claim to Dokdo is baseless.”

The video clip begins with a scene where Sugihara Yumiko, writer of the picture book with the same title as Japan’s Youtube video, explains her memories on mechi, or gangchi in Korean. In the video, Yumiko said, “When we swam in sea, the sea lions came closer to us and we swam together. At the end of the sea wave, Takeshima (the Japanese name for Dokdo) is awaiting us.”

In the Dokdo News video, Cho counters the picture book by saying, “It looks like a good picture book with cute gangchi characters. But, there are too many problems.”

According to the video clip, there were once as many as 40,000 sea lions living in the sea near the island. However, the sea lions in the area disappeared suddenly, and the timing was closely related to Japan’s appropriation of Dokdo.

In 1904, a Japanese fisherman named Nakai Yozaburo asked the Japanese government to incorporate the islets to grant exclusive fishing rights at Dokdo. At the time, Japan’s government denied his request as Dokdo belonged to Korea.

However, discovering the islets’ strategic importance while preparing for war against Russia, the Japanese government began a process to incorporate Dokdo, claiming that it was no man’s land. Finally, Japan incorporated the islets into Shimane Prefecture in 1905. 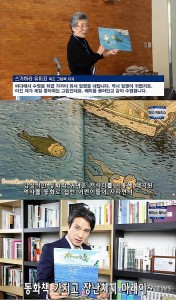 The video revealed that the picture book is distorting history by focusing on the Japanese fishermen who swam with the “mechi,” while not explaining the whole situation step by step. (image: Yonhap)

In the meantime, as the value of the skin and oil of the sea lions skyrocketed due to the war, hunting activities reached a peak. In 1904 and 1905, Japanese hunts netted around 5,600 sea lions. In total, they captured or killed a total of 14,000 sea lions at Dokdo.

Now, the cruel hunters are described as friends of gangchi in the picture book, and they are using the sea lion characters in propaganda of their claim to the islets, planting the notion in the minds of Japanese kids that the beautiful Dokdo where the sea lions lived is illegally occupied by Korea.

The video revealed that the picture book is distorting history by focusing on the Japanese fishermen who swam with the “mechi,” while not explaining the whole situation step by step. “The Japanese invasion began at Dokdo, and the first victim was gangchi,” it said.

Professor Seo said, “We will produce the video in other languages including English and Japanese, and spread it all around the world. Whenever the Japanese government claims Dokdo, we will publicize a relevant episode of ‘Dokdo News’ and, and official Youtube channel will be created.”