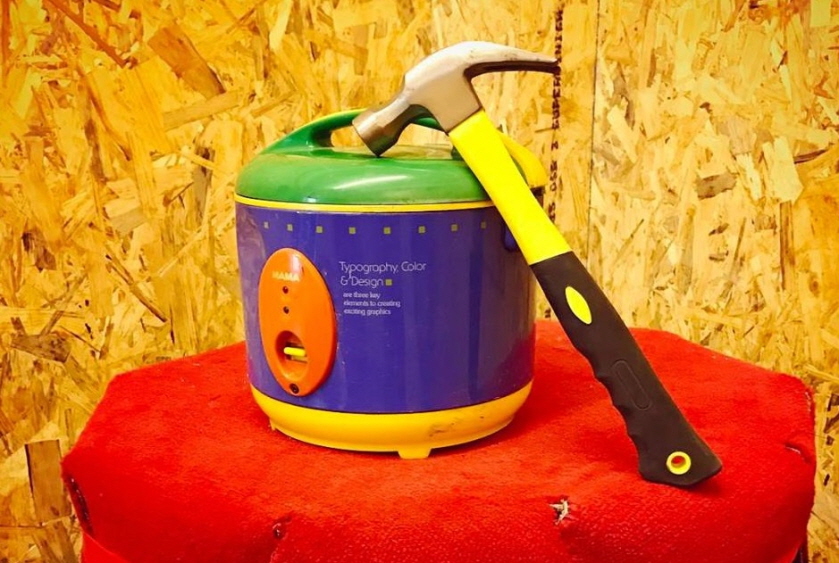 SEOUL, Jul. 20 (Korea Bizwire) — From behind a small and tightly closed room came the seemingly unending ear-blasting sound of shattering, banging and, at times, high-pitched squealing and giggling. You might instantly think that this must be an ongoing crime scene or just simply dismiss it as nothing but a horror TV drama or movie.

Fortunately enough, it is neither a crime nor anything that is illegal at all. Inside the recently opened Rage Room in Seoul are people apparently trying to escape from their daily grind by smashing, banging and giggling away their stress “for a fee.”

Launched in the Hongdae area, one of the hottest spots in western Seoul, early in April, the Rage Room provides a unique experience for people to blow off stress by physically breaking things.

“We had thought over this idea for years based on our own experience at workplaces. We knew how stressful life can be,” said Steve Kim, a 31-year-old, who launched the business together with his friend. “When we broached this idea to friends, they said, ‘It’s so cool and sounds so fun, though my parents thought that we were crazy.”

Customers can choose from five different programs — Vandalism, Destruction, Demolition, Annihilation and Madness — depending on how much they pay, and for how long and how many things they can break.

For 20,000 won (US$17.80) to a maximum of 180,000 won, they can have up to 15 minutes at their disposal, throwing or breaking things, ranging from cups and plates to home appliances and electronics devices.

Safety is surely a top priority. Customers should be armed with protective gear, including shoe covers, helmets, goggles and gloves before finally going on a “destruction rampage.”

It is not the first time that such a new way of easing stress was turned into a business.

Similar shops have been launched in the United States and some European countries since years ago, drawing attention from youngsters who tend to easily flirt with new ways of easing stress.

Such a shop opened about 10 years ago in South Korea as well. But it went out of business soon thereafter without making a memorable dent in the minds of many customers.

“We have made this more commercial and customer friendly,” Kim said. “The key to success will be how to keep the cost of all those things fated to be broken low. Of course, that is a secret of our business.”

The business is in its early stage, and it cannot be said to be booming at this point. But it is drawing quite good customer response, in particular, from those in their 20s and 30s, major age groups frequenting the Hongdae area in western Seoul. 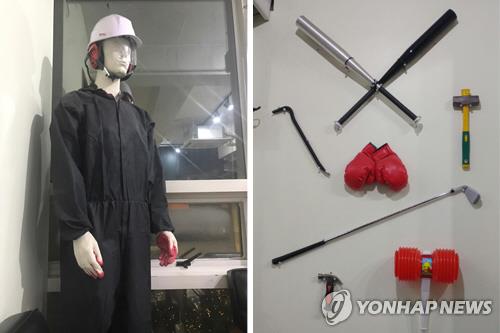 “I didn’t know that I had so much stress inside, but once inside the room, I was just out of control when I broke all those things,” a 24-year-old customer said after a 15-minute Demolition session he had with friends on a Friday night. “We had a great time.”

A 21-year-old student who came from Colombia to Seoul to meet her Korean friends was also quite impressed with the experience.

“The sound of something breaking into pieces made me feel excited. My stress has gone,” she said. “I have to return to Colombia two weeks later. I wish I could enjoy this there as well.”

The shop draws dozens of customers, and the number tends to surge on weekends when people from all walks of life visit and give it a try. Some come alone, and there are also a bunch of people visiting the shop as part of workshop programs, the owner said.

Not all customers, however, seem to be satisfied with the idea of breaking something to blow off stress.

A 37-year-old office worker, who declined to be identified, said that he was at first intrigued by the idea of physically breaking things to ease stress, but it eventually left a bitter aftertaste.

“In all honesty, I was a little afraid that the fragments from broken cups and others flew upon me during the session. I did it out of curiosity, but I would not come back again,” he said.

Experts said that such “binge destruction” seems to reflect a society where people have difficulty in temping down their anger in the face of many challenges confronting their lives, such as harsh economic conditions and high unemployment, especially among younger people.

They see it as a negative way to let go of stress, saying that younger people should find better and “healthier” alternatives.

“Destroying things might give you an instant catharsis but demand for such an experience would intensify going further. People could eventually get more receptive to violent behaviors, which would be hard to control later on,” said Kwak Keum-joo, a psychology professor at Seoul National University.

“Though the business is not booming or anything, I am still worried that all of this might be reflecting a trend in our society where people appear to be opting to vent their anger quite often before trying to resolve differences through dialogue,” she added.

Steve Kim, who runs the Rage Room, said that he wants his customers to leave behind no anger when they are done with the service. To that end, Kim said that he turns on “soothing” music in the hall where people can calm down after going on a destructive rampage. It differs from the battle music they listen to inside the room.

He still noted that it seems there has been a change in perception in how to address wrath and anger mostly among young people, saying that they have become more active in venting their inner feelings in more positive manners.

“Compared with a decade ago, when a business like this appeared and went belly-up a short time later, people seem to be more interested in this way of relieving stress,” he said. “Senior people, including my parents, didn’t like it at first, but their perception appears to be changing.”

He, however, cautioned against reading too much about his business, only asking it to be regarded as just another way of entertainment.

“This is no more or less than just another kind of entertainment.”