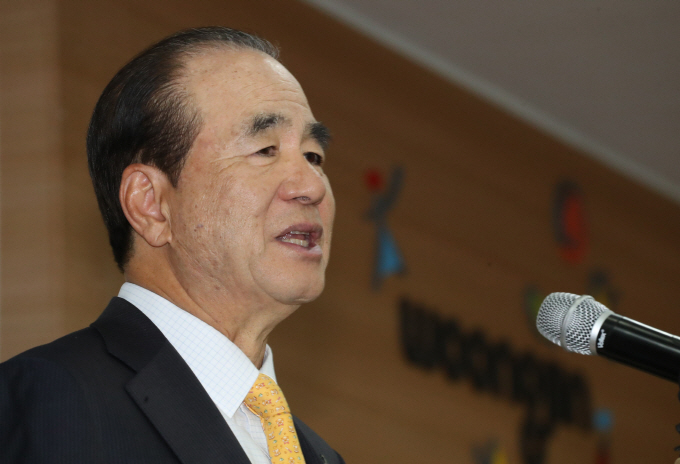 Woongjin Group CEO Yoon Seok-keum speaks during a press conference at the group’s headquarters in Seoul on Oct. 29, 2018. (image: Yonhap)

Woongjin Thinkbig and STIC Investment will pay about half of the purchase price while Woongjin Thinkbig will borrow the remaining half from the Korea Investment & Securities Co. for the deal, which is set to be closed around March, according to the company.

“The acquisition of Coway will serve as a driving force of Woongjin Group,” Woongjin Group Chairman Yoon Seok-keum said in a press conference in Seoul, citing increased rental business.

The deal would see Woongjin take back control of South Korea’s top water purification maker in more than five years.

Woongjin could announce the sale of its affiliates, including Woongjin Energy Co., at the end of this year or early next year to focus on its rental and education content making businesses, said Ahn Ji-yong, who heads the group’s planning and coordination office.

“We are planning to sell some of our affiliates and increase our stake in Coway,” said Ahn, explaining that a 22 percent stake is not the most favorable circumstance in which to manage a company.

In 2013, MBK Partners acquired a 30.9 percent stake in Woongjin Coway Co. from the then cash-strapped Woongjin Group for about 1.2 trillion won. The company was later renamed Coway.

MBK Partners had sold part of its stake twice in block deals that lowered its stake in Coway to 22.17 percent.