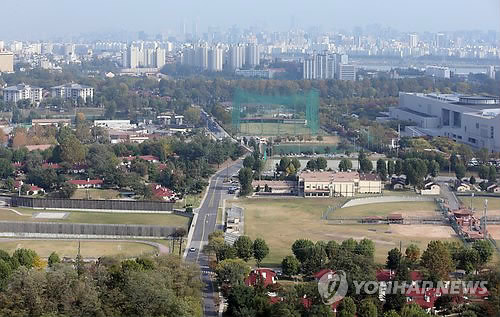 The U.S. 8th Army’s garrison in Seoul will being redevelopment in the second half of 2015, according to the government’s new plan to boost investment.

SEOUL, Jan. 19 (Korea Bizwire) – The Korean Government is getting serious about several real estate development projects in a bid to invigorate the tourism industry, according to an announcement on January 18 from related ministries and agencies such as the Ministry of Strategy and Finance, the Ministry of Land, Infrastructure, and Transport, the Ministry of Culture, Sports and Tourism, the Financial Services Commission, the Korea Customs Service and the Small and Medium Business Administration.

Duty free stores, hotels and facilities related to marine tourism will be developed in the announced plan called ‘Measures to Boost Investment for Tour Infrastructure and Innovating Entrepreneurs.’

Progress has been already made as one of the development projects included in the plan has been saved from setbacks caused by differences of views among related governmental agencies. The development plan regarding the relocation of U.S. 8th Army’s garrison in Yongsan into the new garrison in Pyeongtaek was originally initiated by a Build Transfer Operate (BTO) agreement between the Ministry of National Defense (MND) and the Korea Land and Housing Corporation (LH) in 2007.

According to the agreement, the LH would first allocate 3.4 trillion won (US$ 3.1 billion) of its own funds to construct and operate a portion of the new garrison in Pyeongtaek, while the MND would transfer four districts in the Yongsan garrison to the LH to save costs. However, the development project was discontinued due to Seoul City Government’s disagreement with the BTO plan.

The MND plans to achieve a floor area ratio of 800 percent in three districts of the Yongsan garrison, while Seoul plans to restrict the height of buildings in the district to 70 meters.

Meanwhile, Yongsan Park, which will be developed at the garrison site in Yongsan, will be created as an ecological park with the site’s geological and natural traits preserved and undisturbed. The construction of any new buildings is prohibited according to the newly suggested plan. The general plan formulated in 2011 was modified to the present form after taking into consideration feedback from Seoul City and non-governmental organizations in Seoul.

An area of 2.4 million square meters at the former garrison will be turned into a park, while the remaining 2.6 million square meters will continue to be used for their original purpose, such as sites for the Embassy of the United States, Dragon Hill Hotel, heliports and U.S. Army owned buildings.

The MND will finish the basic design for the development by the end of 2016, and will start the construction process in 2019 in accord with the U.S. Army’s relocation schedule. The MND will open the park provisionally in 2018 within its well-protected areas, and complete the whole process by 2027.