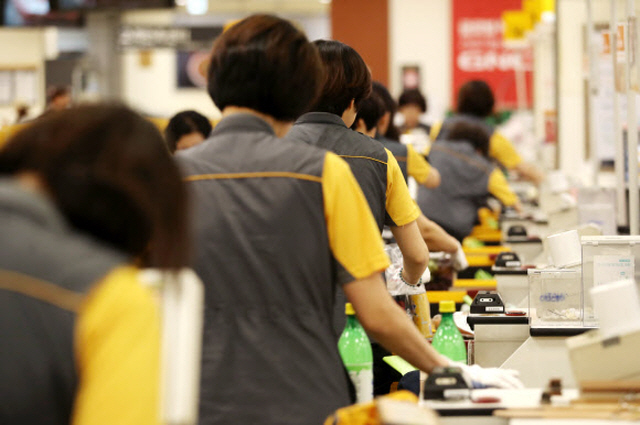 77.9 percent, or 524 large supermarket workers expressed their desire to have time off on holidays. (Yonhap)

SEOUL, May 16 (Korea Bizwire) — Eight out of 10 employees who work at large supermarkets or super supermarkets (SSMs) want to rest on holidays such as Lunar New Year’s Day and Chuseok, the Korean equivalent of Thanksgiving.

Rep. Bak Maeng-woo of the main opposition Liberty Korea Party reported on Wednesday that he and the Gyeonggi College of Science and Technology conducted a survey of 673 employees working at large supermarkets and SSMs in Seoul from March 30 to April 2.

The results showed that 77.9 percent, or 524 people, expressed their desire to have time off on holidays.

In addition, 77 percent of the respondents, or 579 people and 83 percent of SSM employees, or 94 respondents, agreed that the day of the holiday should be designated as a mandatory holiday.

As to the reasons why workers wanted to take time off on such days, 80.5 percent of the respondents wanted to spend the holiday with their family or friends, while 10.2 percent said not many customers visit the store on holidays.

The approval rate for those in their 20s was 59.7 percent, lower than that of other age groups.

As many as 95 people, or 14.1 percent of the total group of respondents, opposed the holiday, citing the high pay for work on holidays, and 32.6 percent reported that they would like to work because they wouldn’t have to spend time at home.

Under current laws, local governments will set two of every month’s public holidays as mandatory days to shut down supermarkets, banning large supermarkets or SSMs from operating.

However, large supermarkets typically designated such mandatory days off on Sundays.

This means that most large supermarkets and SSM employees take a day off on Sundays, which are set as mandatory holidays, even if the holidays come near, but most have to work on the actual day of the holiday.