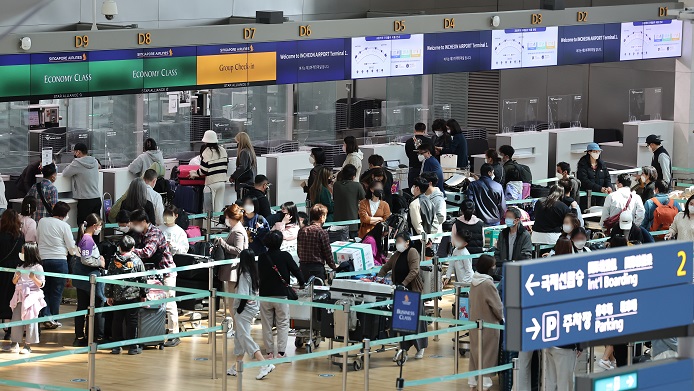 The check-in area at the First Passenger Terminal of Incheon International Airport, west of Seoul, is crowded with travelers on April 7, 2022. (Yonhap)

SEOUL, July 22 (Korea Bizwire) — An increasing number of airline workers who took leaves of absence are returning to work, thanks to the gradual return of international flights.

Korean Air Lines Co., South Korea’s national flag carrier, saw the proportion of employees who took leaves of absence slip to less than 20 percent this month, according to industry sources, meaning 13,600 out of its 17,000 employees are now working.

During the peak travel disruptions brought on by the COVID-19 pandemic, about half of Korean Air employees took a leave of absence, but starting from early this year, they returned to work on a gradual basis thanks to the growing number of international flights.

Jeju Air Co., the country’s biggest low-cost carrier, has had all of its 630 flight attendants return to work this month as part of efforts to cope with the increase in international flights.

For T’way Air, another budget carrier, the rate of employees on a leave of absence remains low at about 15 percent. All of its 1,900 employees will return to work within the next month.

At Asiana Airlines Inc., South Korea’s second-biggest carrier, about 50 percent of employees are currently taking paid or unpaid leave, and the company plans to adjust the proportion of such employees depending on the speed of its business recovery.

Although domestic airlines have started preparing for the post-COVID-19 era in earnest, there are concerns that the new wave of COVID-19 infections could serve as a stumbling block preventing the normalization of operations.

“We’re not in a situation where we can look back. Our survival depends on the growth of international flights in the third quarter,” said an official at a low-cost carrier.