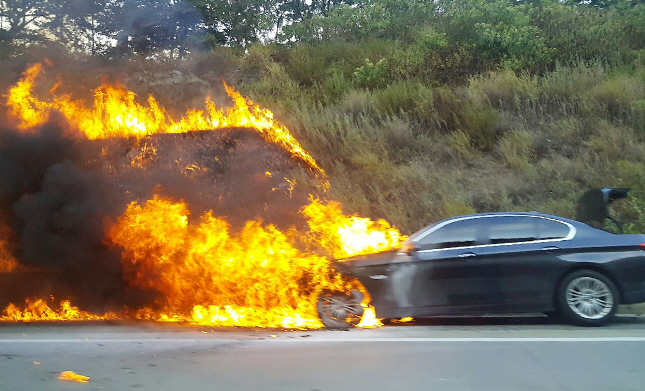 The owners called for the adoption of laws that would allow the public to file for punitive damages, which they say would “prevent multinational corporations from taking advantage of the Korean public.”

Lee, the leader of the group of 23 BMW vehicle owners, said, “41 cases of fires involving BMW vehicles have been reported since August 16, and reports of new fires still continue almost every day.”

Lee also mentioned that the vehicles that went up in flames made up a ratio of 1.5 vehicles out of 10,000, the highest ratio of cars currently being driven in Korea.

“The recall in Korea will come after the recall efforts in Europe and because it is not easy to get the appropriate car parts, the recall process is expected to take more than a year,” continued Lee.

As current laws in Korea do not recognize punitive damages, the public at large is being subject to substantial losses involving their private assets, according to Lee.

The losses stemming from the falling price of used BMW vehicles are also problematic.

After the vehicles were banned by the government from being operated on the streets, prices of secondhand BMW vehicles tumbled by 14.3 percent.

Lee said that he and other BMW owners will be filing a lawsuit claiming damages against BMW Korea.

At present, there are a total of 5,454 BMW vehicles registered in the city of Ulsan. Of these, 1,566 cars are subject to the recall.