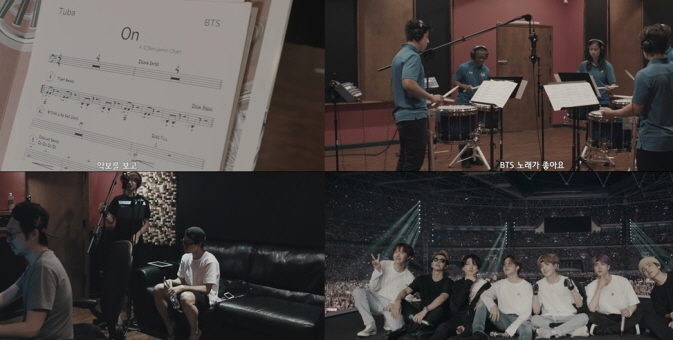 SEOUL, Feb. 24 (Korea Bizwire) — “They pull everybody together, in a time where it seems like the world is going the opposite, so we need people like that who are bringing people together,” said American trombonist Duane Benjamin, who participated in K-pop boy band BTS’s fourth album, “Map of the Soul: 7.”

Benjamin appeared in a new documentary, “‘ON’ Commentary Film: Dialogue,” which was revealed online last Saturday.

The film is an 18 minute-long documentary of an American music director, recording engineer, UCLA marching band, and members of the Gospel Choir who participated in the production of the lead track, who emphasized that BTS and their music transcend language and cultural barriers.

“A lot of people in the U.S. have never been outside of the U.S. and would never know what K-Pop was if they hadn’t broken that barrier and brought us into their world,” said Amber Wright, a member of the Gospel Choir.

Korean lyrics don’t pose a problem since the music transcends language barriers, and it is enough to feel the excitement and love just by listening to the music and the performance, they say.

“I could feel the positivity through music,” they added.

“We have some marching band people, some people from the global jazz department and we mixed them together, like what BTS does,” said Benjamin.

BTS is introducing a series of pioneering content offerings including an art film for the ‘Black Swan’ performed with MN Dance Company in Slovenia.

They have also joined hands with contemporary artists around the world to begin the project “Connect, BTS” where artworks that embody the spirit of BTS are created and put up for exhibition across the globe.

While BTS members don’t make full appearances in these videos and projects, the band’s management agency Big Hit Entertainment continues to work with artists from various fields to deliver the meaning of BTS and their music far and wide.