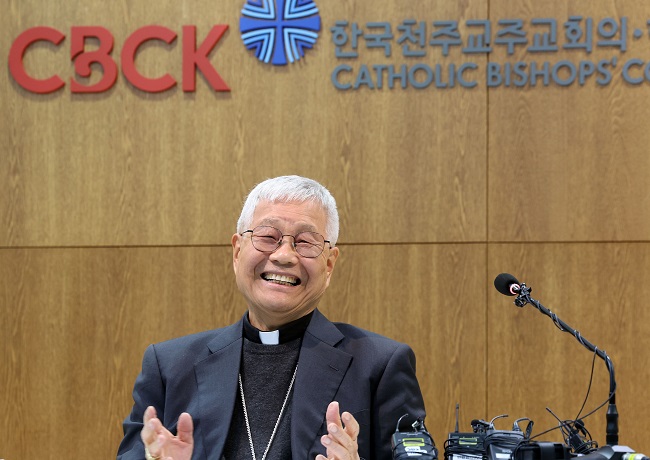 Cardinal Lazzaro You Heung-sik smiles during a press conference in Seoul on Dec. 2, 2022. (Yonhap)

“Everything depends on North Korea. But I understand there has been no response from the North,” the cardinal said when asked during a press conference in Seoul about the chance of any papal trip to Pyongyang.

You, who serves as prefect of the Congregation for the Clergy of the Holy See, arrived in South Korea on Wednesday for a month-long vacation. It marks his first visit to his home country since July 2021, when he left to assume the post.

The pope has expressed willingness to visit the North in an interview with the South Korean broadcaster KBS in August, asking the regime to invite him to the country.

“North Korea will count on practical diplomatic gains (from the visit),” the cardinal said. “There will be many possibilities the North will try to find a breakthrough through the pope’s visit to the country when it faces various difficulties.”

Citing the no-deal summit between U.S. President Donald Trump and North Korean leader Kim Jong-un in 2019, he forecast that the pope is expected to make efforts to build trust between the two countries if he visits Pyongyang.

“The visit could greatly enhance the international status of North Korean leader Kim Jong-un,” You said.

“I pray every day that his visit to the North will take place, thinking that the country can use it as a starting point to overcome its crisis in one way or another.”

The cardinal said he had several chances to talk about North Korea with the pope but has never discussed details, like humanitarian food aid to the country.

North Korea is currently low on the Vatican’s priority list with addressing the ongoing war in Ukraine or providing aid to the war-torn country being its top priority, he added.

The cardinal expressed regret for the deadly crowd crush that killed at least 158 people in Seoul’s Itaewon neighborhood, saying, “Such a disaster would not have happened if the authorities had faithfully performed their duties and given their all.”

He hoped it will serve a chance to prevent any recurrence of similar incidents.

You became the first South Korean to be appointed to a secretary position at the Vatican in June last year.

He will return to the Vatican early next month, wrapping up his month-long visit.