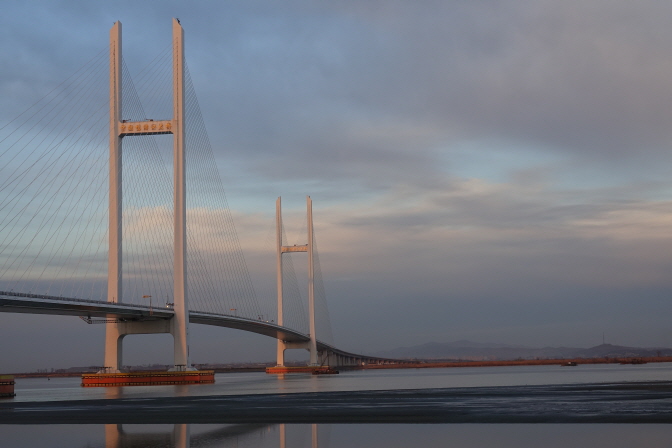 The opening of the New Yalu River Bridge, a major new bridge between North Korea and China, has been indefinitely postponed. (image: Yonhap)

Along the border, China has been expanding its infrastructure and adjusting the standard of commercial facilities. Such preparations occurred as a result of the progress shown between North Korea and the United Nations Security Council.

China will set a development project as soon as North Korea opens up and reaches an economic agreement with China.

Dandong, which is known to be responsible for 70 to 80 percent of North Korea’s trade volume, is the place where China announced its plans to join the countries with a new Silk Road in September.

The Chinese government plans to connect the Korean peninsula, Japan and Mongolia by creating a ‘Northeast Asian Economic Passage’.

In addition, a border bridge between Tumen and Namyang is under construction near Hunchun, China.

This border bridge will play a crucial role in the opening of the South as the trade zone in Jilin Province will be the largest in terms of land area and construction volume among the border between North Korea and the most efficient in terms of customs clearance.

China plans to gather cargo in Jilin Province and use the bridge to transfer it to North Korea.

Chinese experts predict that demand for consumption will increase significantly if North Korea does its best to develop its economy, with some suggesting that high-quality large-scale labor from North Korea will come to the northeast of China.

However, in order for such things to happen in the future, North Korea has to open its doors to the outside world.

There are still many obstacles for North Korea to overcome in terms of progressing nuclear negotiations with the U.S and the United Nations Security Council.