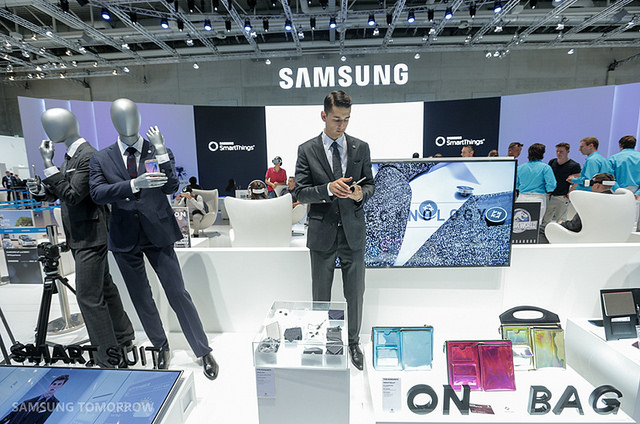 Home electronics companies and telecommunications companies that provide a formless platform are entering the IoT ecosystem, offering to serve as a hub. (image: Samsung Electronics)

SEOUL, Sept. 8 (Korea Bizwire) – In order to succeed in the IoT (Internet of Things) market, which is the blue chip of the ICT (Information and Communications Technology) industry, many companies are seeking a symbiotic relationship instead of a competitive one.

Home electronics companies and telecommunications companies that provide a formless platform are entering the IoT ecosystem, offering to serve as a hub.

After SK Telecom exchanged a memorandum of understanding with Samsung Electronics in April, they signed a similar agreement with LG Electronics at the IFA 2015 on September 4.

SK Telecom will link their own ‘Smart Home’ IoT platform with home electronics from Samsung. They also plan to link Smart Home with LG’s ‘SmartThinQ’, a system that controls ordinary home electronics with a smartphone through an attached sensor.

Since the leading company has yet to be established in the IoT market, the focus is on who can strengthen cooperation in various terms.

LG Electronics also joined forces with SK Telecom instead of LG Uplus, which has its own IoT platform, ‘Home Chat’, because linking as many devices as possible before the market is mature will offer a better chance of success.

LG Uplus is also planning to cooperate with Samsung Electronics, one of LG Electronics’ direct competitors, and is discussing terms on a working level. Competition within the telecommunications platform has become meaningless.

Officials say that those who do not set up an IoT ecosystem within 2 to 3 years will lose their influence in the electronics market. Since the most important thing is to integrate services, social splitting is meaningless.