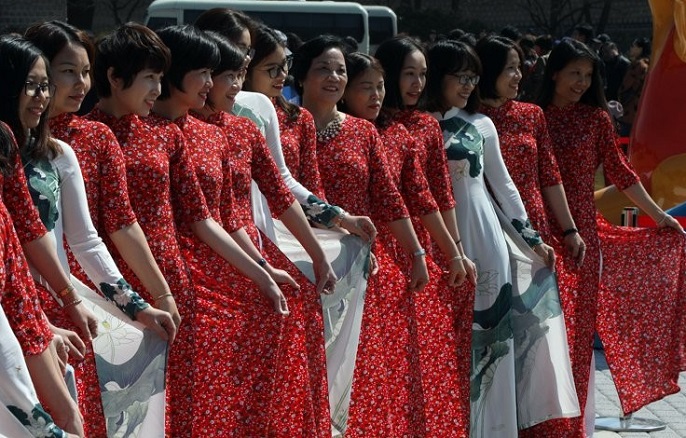 A group of Vietnamese tourists dressed in indigenous “ao dai” gowns poses for a photo in front of the presidential office in Seoul on April 3, 2019. (Yonhap)

SEOUL, April 21 (Korea Bizwire) — Most divorced Vietnamese immigrant women in South Korea bring back their children whom they sent to their home country after divorce once they achieve economic self-reliance, an analysis of data showed Tuesday.

Choi Soo-ahn, a doctorate student in the Department of Multicultural Studies & Education at Inha University, said that such a conclusion came after analyzing a thesis presented at a seminar held by Dongguk University.

The thesis was based on the analysis of 14 theses that were found after searching for keywords such as divorce, single parent, and family disintegration in the Korea Citation Index (2013-2020).

The analysis showed that most divorced Vietnamese immigrant women adopted the strategy of sending their children to their home country due to economic hardship and the difficulty with child care and then bringing them back to South Korea after achieving economic self-reliance.

“Given the difficult situation facing the divorced Vietnamese immigrant mothers, the government should improve policies for their acquisition of citizenship and overall welfare,” Choi said.