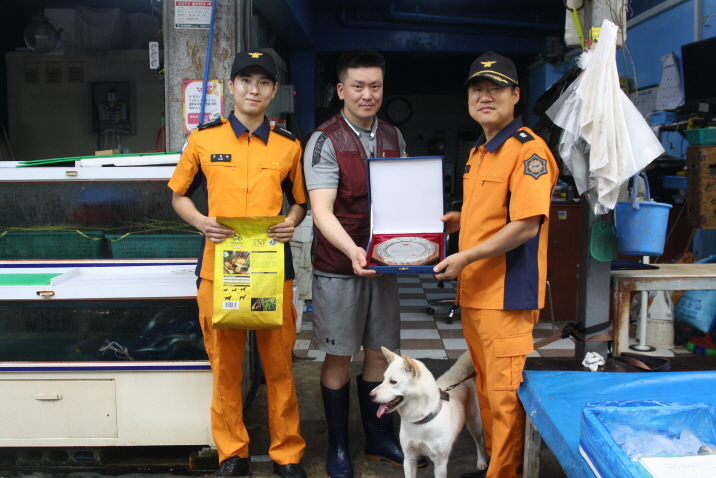 GWANGJU, Jul. 27 (Korea Bizwire) — A dog that alerted its owner to help put out a fire that may have led to a larger disaster has been awarded a certificate, while the animal’s owner was given a plaque for his efforts by a fire station in Gwangju.

Approximately 20 minutes past midnight on July 22, a fire broke out at a shop in Malbawu Market in Buk-gu, Gwangju.

The dog’s owner, a 62-year-old man referred to only as Cho, was awoken from sleep after hearing his dog barking frantically, and called for emergency assistance.

He took out a fire extinguisher that he kept in his shop to stop the fire from spreading to other businesses in the market.

The local fire department awarded 2-year-old Gaeuli, the brave dog, with a certificate for waking up Cho in time to put out the fire.

And to recognize Cho’s efforts for using the fire extinguisher to stop the spread of the fire, fire department officials awarded him with a plaque and dog food.

Jo Tae-gil, the chief of the Bukbu Fire Department in Gwangju, said that a fire that could have resulted in greater damage was prevented because the dog alerted its owner, while adding that fire detectors and extinguishers should be installed in all households to prevent fires.