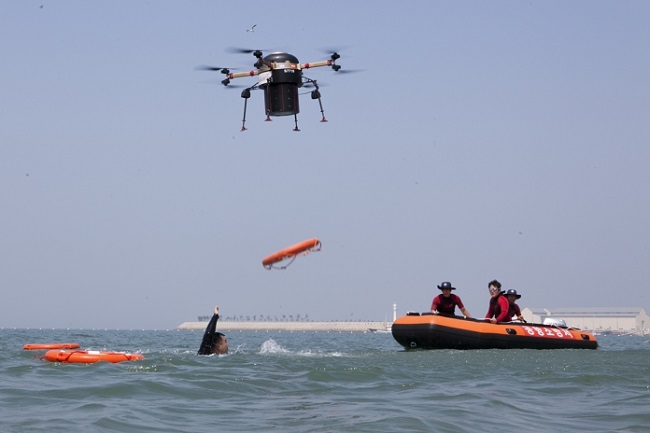 Moments later, a rescue drone hurtled towards the swimmer’s location, and dropped the life preserver it was carrying. (Image:SKT)

Or at least that’s what a future scenario might look like. This past Friday, a drone on patrol a few meters above the sparkling blue of Wangsan Beach in Incheon “discovered” a swimmer struggling to stay afloat above water, and immediately notified the control center.

Moments later, a rescue drone hurtled towards the swimmer’s location, and dropped the life preserver it was carrying. Meanwhile, the rescue drone hovered in place, reassuring the swimmer by repeatedly broadcasting “A rescue team is on its way. Please hold on!”

Carried out across a number of different beaches, the above was a live action demonstration of the potency of an integrated system of drones and existing mechanisms and the ideal scenario for what technology could enable those in the business of lifesaving to achieve.

The drones developed by Soomvi and SKT boast advantages over prior iterations that make them far more efficient. The latest drones are connected to an LTE network and are uninhibited by long distances, a stark contrast to the older versions which relied on wireless Wi-Fi networks and often could transmit no further than three kilometers.

In addition, SKT’s T Live Caster technology, a gadget for enabling LTE access, weighs a little over 140 grams, lightening the load of the overall drone. The new drones also cost only 3 million won each, one seventh of the price of the older equivalents. The technological advances have made the drones cheaper and lighter as well.

The control center is a refurbished 5-ton container truck. The truck is stocked with advanced communications and video systems, and various support tech for the drones. The ability to receive transmissions without using an outside server is a big advantage in its ability to communicate with the drones.

SKT and Soomvi are currently in talks with various regional authorities to sell the technology. Soomvi already has an agreement with the city of Incheon to provide drones for reconnaissance missions that will gather information about air pollution and waters designated for fishing.

SKT expects the drones to become even more efficient in the future, when next generation wireless networks such as 5G become incorporated into the drone hardware.