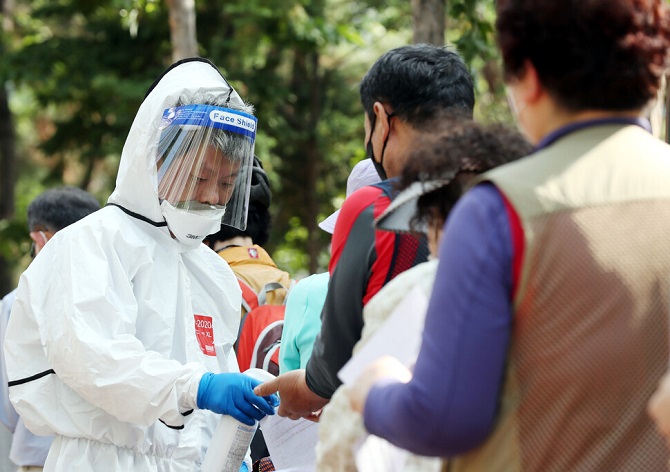 An official hands out hand sanitizers to people waiting in line at a makeshift clinic in Incheon, west of Seoul, on June 3, 2020. (Yonhap)

The number of food poisoning cases occurring last year in the country stood at 178, which is equivalent to 52 percent of the annual average of 343 cases for the previous five years from 2015 to 2015, according to the Ministry of Food and Drug Safety.

Accordingly, the number of food poisoning patients also dropped to 2,747 last year, a level that is equivalent to 40 percent of the annual average of 6,874 for the previous five years.

The numbers of both cases and patients marked the lowest the ministry has ever seen during the entire period that it has been collecting relevant data, since 2002.

The ministry attributed the decline in both food poisoning cases and patients to the sharp decrease in the number of group meal programs, including school meals, due to the outbreak of the coronavirus.

“The number of food poisoning cases declined sharply last year as public interest in personal hygiene increased as a result of the COVID-19 pandemic,” the ministry said.