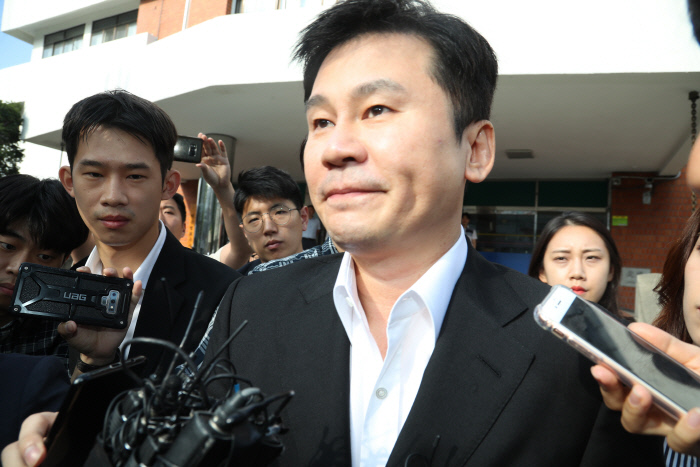 Yang Hyun-suk, former CEO of YG Entertainment, is surrounded by reporters as he leaves the office of the Seoul Metropolitan Police Agency’s Intellectual Crime Investigation Team in Seoul, on Aug. 30, 2019, after being questioned about his gambling and pimping charges. (Yonhap)

The 49-year-old Yang emerged from the office of the Seoul Metropolitan Police Agency’s Intellectual Crime Investigation Team in Seoul at around 8:30 a.m., about 23 hours after he was summoned there Thursday as a criminal suspect.

Yang was asked by reporters multiple questions about his charges but simply said he faithfully underwent police grilling. “I answered police questions faithfully and gave a detailed explanation,” he told reporters.

Yang faces allegations that he, together with Seungri, a former member of the K-pop boy band BIGBANG, regularly gambled at hotel casinos in Las Vegas and violated the foreign exchange law to secure gambling money.

Seungri, whose real name is Lee Seung-hyun, was also summoned to the special police unit as a suspect Wednesday and underwent questioning for over 12 hours. Yang and Seungri reportedly spent 1 billion won (US$823,000) and 2 billion won, respectively, on gambling.

In a separate case, Yang was booked in July on suspicions that he arranged sex services for foreign investors in 2014 while treating them at a posh restaurant.

According to police sources, the questioning of Yang was prolonged as he denied most of his charges.

Idol-turned-K-pop guru Yang resigned from the top post at YG Entertainment in June as its big-name artists were embroiled in a series of scandals, including alleged drug use.