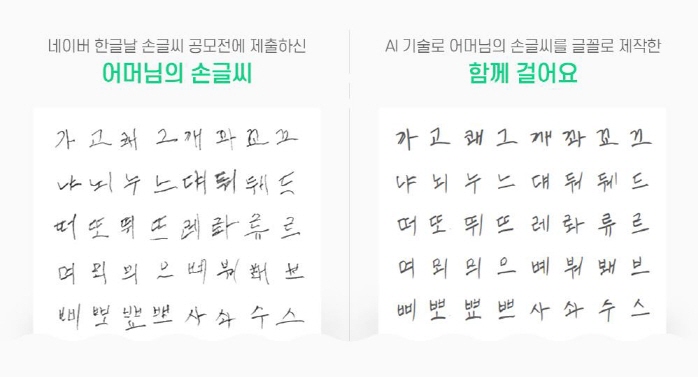 SEOUL, Nov. 12 (Korea Bizwire) — Letters handwritten by a patient suffering from a rare incurable disease have been processed, using artificial intelligence (AI) technology, to be used as a computer font.

South Korea’s top portal operator, Naver Corp. announced on Monday that the font, titled ‘Let’s Walk Together’, will be available for free distribution.

Her daughter, Ji Su-jin, submitted her mother’s handwriting to a competition hosted by Naver to tell the world about the hardships faced by those with cerebellar atrophy.

Cerebellar atrophy is a rare, incurable disease that causes walking and speech disorder as well as abnormal limb movements due to complications in the cerebellum that cause a loss of balance.

Naver accepted Ji’s story and used its Clova AI platform to transform her mother’s handwriting into a computer font.

The font’s title, ‘Let’s Walk Together,’ reflects the wish by all those with rare, incurable diseases to walk together with others.

“My mother has been losing hope as she becomes more and more incapable of doing things on her own, but this opportunity gave her the will to try again,” said Ji.