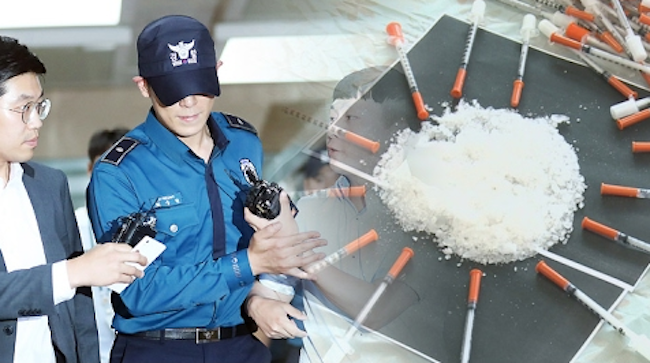 SEOUL, Sept. 22 (Korea Bizwire) – The recent bust of Gyeonggi Province governor Nam Gyeong Pil’s oldest son for illegal narcotics use has reintroduced the subject of such substances into everyday conversation.

The case involving Nam’s son is preceded by the arrest of Choi Seung Hyeon, who was convicted for smoking marijuana with a young woman at his home last October. Choi, who goes by the alias T.O.P and is one-fifth of the popular K-pop group Big Bang, was given a suspended sentence of two years, while his partner in crime was given a four-year suspended sentence, an 870,000 won fine, and placed under 120 hours of legal supervision.

The two high profile cases, though shocking to the public and seemingly having come out of nowhere, are actually indicative of a black market for illegal narcotics steadily increasing in size.

According to a report by the Supreme Prosecutor’s Office titled “White Paper on Crimes Related to Illegal Narcotics in 2016”, 14,214 individuals were rounded up in connection to such crimes last year. Compared to the 11,916 arrests in the previous year, the number of violators increased by 19.3 percent.

Seized amounts of philopon – a name commonly used in East Asia to refer to methamphetamines – and marijuana both increased year-on-year. The quantity of philopon confiscated in 2016 was a whopping 41.8 percent higher than in 2015 (82.4 kg to 117 kg) while marijuana seizures increased by an even more astronomical 214.6 percent.

As there were only two cases last year in which narcotics were found to be “homegrown”, the white paper asserts that the vast majority of all substances were smuggled into the country. As evidence, the paper also provides data showing that 957 violators hailing from 30 different countries had been corralled by law enforcement. The number of foreigners who committed drug felonies also increased by 49.5 percent from the year before.

The documents broke down the number of drug law violators by age demographics, which revealed that drug use among those in their teens and 20s surged between 2012 and 2017. 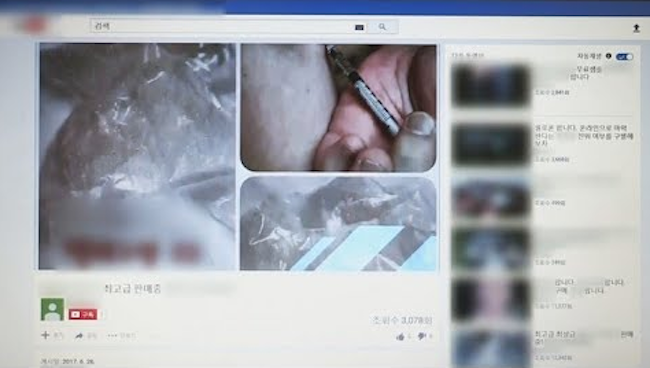 To account for the growing prevalence of drug use among young adults, legal authorities have pointed to the ease in procuring narcotics through social media platforms and online messaging apps. (Image: Yonhap)

By region, Gyeonggi Province (8,944), Seoul (8,379), Busan (3,738) and Incheon (3,332) had the highest occurrences of drug cases, understandable given their large population clusters relative to other areas.

To account for the growing prevalence of drug use among young adults, legal authorities have pointed to the ease in procuring narcotics through social media platforms and online messaging apps.

A good example that shows the unholy marriage between narcotics and technology is the case of Nam Gyeong Pil’s son.

The 26-year-old returned to South Korea from China on September 15 carrying 4 grams of philopon hidden in his underwear. The next day, he supposedly consumed part of his drug stash and was in the process of searching for a woman to share the drug with through a dating app when he came across a “match”, who unfortunately for him happened to be an undercover police officer.

A little more than a week before, on September 6, the Public Administration and Security Committee had made public another set of police documents detailing the very phenomena that would prove to be the young man’s downfall.

Through the committee, police said, “Cases of drug smuggling through internet message boards and messenger apps are on the rise, and deals using bitcoins to avoid detection have also been reported.”

To formulate a proper response, the Supreme Prosecutor’s Office hosted members of the UNODC (United Nations Office on Drugs and Crime) and drug enforcement officials from over 20 countries for the 27th Anti-Drug Liaison Officials’ Meeting for International Cooperation on Jeju Island on September 21 and 22.

The use of virtual currencies and social networking services in drug smuggling were reportedly significant subjects of discussion throughout the conference.

How South Korean law enforcement agencies intend to tackle such problems is unclear. The Supreme Prosecutor’s Office declined to comment on measures discussed during the conference.