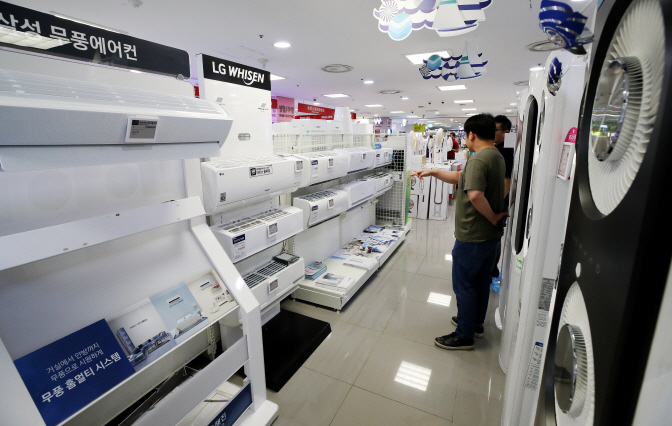 SEJONG, Sept. 17 (Korea Bizwire) — Home appliance sales in South Korea reached a new high in July as the country was gripped by the worst heat wave in more than a century, government data showed Monday.

The constant index for electronics sales came to 189.1 for July, the highest level since 2005, when related data tracking began, according to Statistics Korea.

The base year for the index is 2015, and the July figure means home appliance sales were 1.8 times the amount recorded in the base year.

The previous record was 168.6 set in July last year, while the overall retail sales index for this July came to 111.

In monetary terms, home electronics shipments stood at 2.7 trillion won (US$2.41 billion) in July, up 21.5 percent from a year earlier and the largest ever monthly amount.

The statistical agency attributed the July record to a spike in sales of air conditioners, fans and other cooling products.

“A scorching heat wave resulted in record sales of air conditioners, spearheading the jump in home appliance shipments,” an agency official said. “Numbers for August, slated to be announced late this month, are estimated to be high as the heat wave continued in the month.”