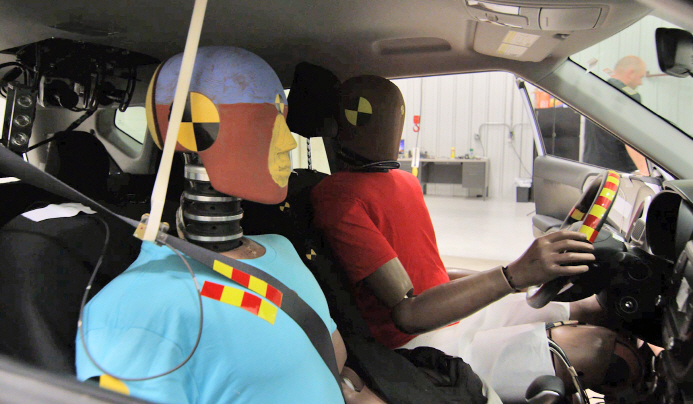 It is the first time for a South Korean carmaker to develop such a multi-crash airbag system. (image: Hyundai Motor Group)

The advanced airbag system immediately prepares for additional crashes once it recognizes an initial collision, in cases where the collision is not serious enough to warrant a deployment, the conglomerate said in a statement.

“If the first collision is a minor one but the vehicle continues on and collides with something else, such as trees or street lamps, the airbag system optimizes itself to prepare for additional crashes,” a company spokesman said over the phone.

It is the first time for a South Korean carmaker to develop such a multi-crash airbag system, the statement said.

Existing airbag systems do not inflate once it determines the initial collision is minor, even if subsequent impacts involve greater force and can lead to serious injury, it said.

Hyundai Motor Co. and its affiliate Kia Motors Corp., the flagships of the automotive group, said they will apply the advanced airbag system to upcoming new and upgraded vehicles.

Three out of 10 multiple car accidents involved multiple collisions, according to a survey of 56,000 car accidents that took place in the United States from 2000 to 2012, Hyundai said, citing data from the National Automotive Sampling System.