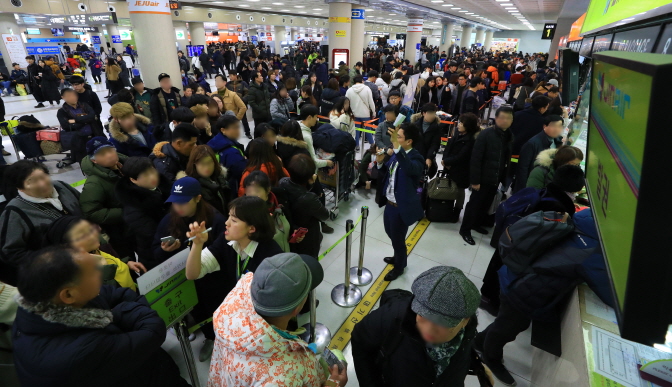 The capacity problem is particularly serious at international airports on Jeju Island and in Busan and Daegu, they said.

In case of Jeju International Airport, the gateway to Jeju Island, the nation’s top travel destination, flight delays have now become a daily routine as its runway capacity approaches its limit.

Under such circumstances, on-time departure is a rarity there.

“In the past, it took less than one hour to travel from Gwangju to Jeju. These days, I allow for one more hour in scheduling my travel due to delays,” said a 30-year-old Gwangju woman surnamed Jeong.

Airport officials say its passenger terminal’s lounges, cafes and restaurants are always overcrowded with travelers even on weekdays. Because of the lack of seating at the lounge, many passengers are forced to stand or sit on the floor while waiting for their departure time.

The situation is similar at international airports in Daegu, 300 km southeast of Seoul, and Busan, a southern port city.

Daegu International Airport, which handles about 10,000 passengers a day is often likened to a marketplace. The number of users of Daegu’s passenger terminal topped 4 million last year, exceeding its capacity of 3.75 million.

Increases in international routes and low-cost airlines have added to the Daegu airport’s capacity problem, officials said. Indeed, the number of its international routes has surged from six in 2013 to 20 now. Recently, Jeju Air launched five weekly flights between Daegu and Macao, while other low-cost airlines have begun services to numerous destinations in Japan and Taiwan.

With international passengers reaching 2 million a year, the Daegu airport’s passenger terminal and parking lot are getting increasingly congested.

Gimhae airport’s international terminal gets extremely crowded between 6 a.m and 8 a.m. every day when flights from Hong Kong, China and Southeast Asia arrive in large numbers.

A 45-year-old man who frequently travels from Busan to Hong Kong complained that it usually takes between 40 minutes and one hour to pass through Gimhae airport’s international arrival hall.