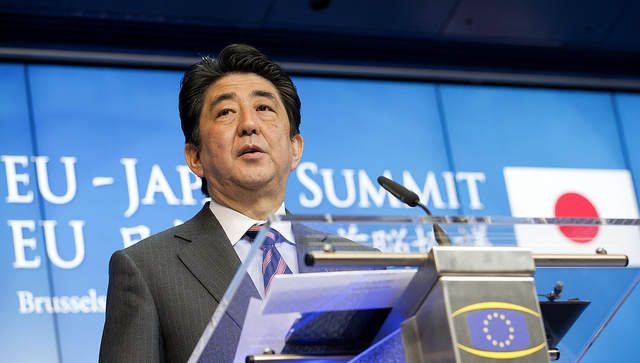 According to the analysis, Abe caused the most controversy during the past 10 years. (image: President of the European Council/flickr)

SEOUL, Aug. 19 (Korea Bizwire) – Among the Japanese individuals that were reported by the Korean press for making thoughtless remarks during the past 10 years, Shinzo Abe, the Japanese prime minister ranked No.1 in terms of the number of mentions.

Abe has made seemingly careless remarks about delicate issues that created a conflict between Korea and Japan, such as colonial history, the Yasukuni shrine, the Pacific constitution, Dokdo Island and Korean ‘comfort women’, creating an even bigger conflict.

The media research center of the Korea Press Foundation announced their analysis of thoughtless comments from Japanese people over the past 10 years. Using their ‘KINDS’ news archive, they looked up articles that had the words ‘Japan’ and ‘thoughtless remark’ in eight newspapers. In addition, actual quotes of the comments were included.

According to the analysis, Abe caused the most controversy during the past 10 years.

Along with Prime Minister Abe, Osaka mayor Toru Hashimoto and Finance Minister Taro Aso were the three that created the most controversy with their thoughtless remarks.

Among the 595 quotes of thoughtless comments reported in the Korean press, 107 were made by mayor Hashimoto. He made many thoughtless statements related to Korean ‘comfort women’.

Among the 99 Japanese individuals that were reported in the press, 81 were politicians. From 2010, however, the number of figures from cultural fields started to increase.

Until 10 years ago, ‘Dokdo’ and ‘textbooks’ were the hot topics, but in 2013, ‘comfort women’ and ‘Yasukuni’ started to generate more controversy.

The results of the analysis were published in the 12th issue of ‘Media Issue’, under the title ‘Network of thoughtless remarks: 10 years of thoughtless comments from Japan analyzed with newspaper big data’.