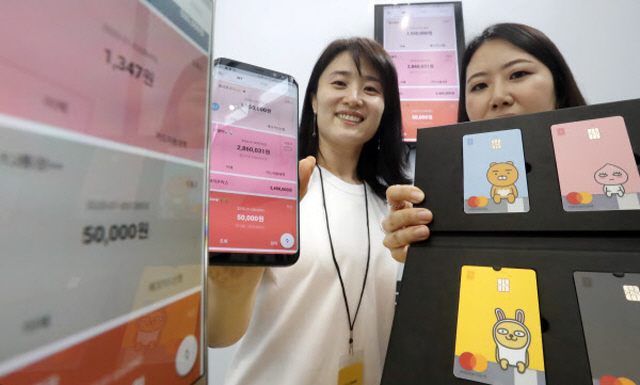 SEOUL, Aug. 1 (Korea Bizwire) — The Internet-only Kakao Bank has succeeded in starting big, gaining over 1 million clients in just five days following its launch, but how the initial clients are using the service suggests there is room for improvement, industry watchers said Tuesday.

However, 67 percent of Kakao Bank clients asked for debit cards, an indication of continued banking service usage, compared with the higher 85 percent of K-Bank. The transaction volume also is bigger for K-Bank.

K-Bank’s start had been stronger in usage figures. Its per-person loans was 410,000 won and deposits 730,000 won after three days of business.

“The number of clients is different from the number of actual users. People can open accounts with Kakao Bank out of curiosity, but whether this leads to real financial transactions needs to be seen,” a banking industry official said.

The volume of transactions is important since both K-Bank and Kakao Bank intend to voluntarily follow the loan to deposit ratio rule applied to regular banks. Commercial banks with assets of over 2 trillion won must maintain the ratio at 100 percent. For Kakao Bank, the small volume of deposits would limit the availability of loans, the bank’s strong point since its lending interest rate is slightly lower than that of its rival K-Bank.

The ratio for Kakao Bank has already reached 94 percent.

“We are still in the early stage of opening. Once our clients actively start using Kakao Bank, the volume of deposits will grow quickly with the number of subscribers,” an official at Kakao Bank said.