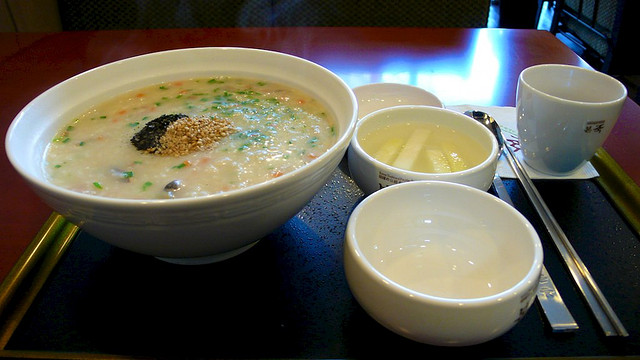 The popularity of porridge in line with the national college admission test season is a unique phenomenon in Korea. (image: Augapfel @flickr)

SEOUL, Korea, Nov 12 (Korea Bizwire) – The College Scholastic Ability Test for the 2014 academic year has ended on November 7. The once-a-year exam is a big national event in which everyone is affected in one way or another. Trading on the nation’s stock market was delayed for an hour, opening at 10 am, instead of 9 am, while planes were prevented from taking off or landing for 40 minutes and the military stopped conducting drills, to reduce noise as students took their exams at over 1,250 test centers.

There are businesses too to benefit from the national ordeal. One of these is restaurants selling porridge, which is popular among parents with test takers who need food that digests well on the most important day of their life.

According to Bonjuk, one of the major porridge restaurant chains, the sales of porridges in its locations nationwide on November 6 and 7 were 83 percent higher than the daily average sales volume. The number of porridge it sold for two days was 140,000 bowls. Of these, the percentage sold on a pre-order basis was 14,000, or 10 percent. Those who bought porridge in this way prepared it in thermos for the students’ lunch on the test day.

The popularity of porridge isn’t limited to the college entrance exam day. Porridge has become one of the most preferred menus for breakfast. According to the 2009 national health survey conducted by the Ministry of Health and Welfare every three years, as much as 21.4 percent of people skip their breakfast before going to work. The percentage of those in their 20s who skip the morning meal was highest at 46 percent. Under these circumstances, there is little wonder office workers who are hungry after arriving at work go out and buy a bowl of porridge for quick eat. 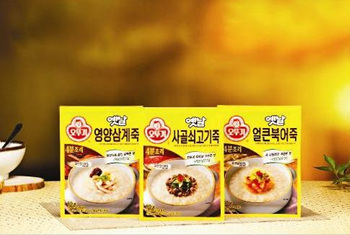 Today the market for instant porridge is estimated at 30-35 billion won. (image:Ottogi)

In truth, it took a long time for people to accept instant porridge when it came out first. When Dongwon F&B launched the microwavable tuna porridge in 1992, most customers found it strange because at the time people were accustomed to the notion of porridge as taking a long time to make. But convenience combined with nutrition eventually trumped everything else. Today the market for instant porridge is estimated at 30-35 billion won, with Dongwon F&B accounting for 70 percent of the market with its “Yangban Juk” brand, followed by CJ’s “Hetban Juk.”

Other food processors are following suit, with new offerings in different flavors. For example, Ottogi has recently introduced “Yetnal” brand porridges in three flavors, ginseng-chicken, beef bone soup, and dried pollack. The company said it picked the three varieties based on a series of surveys on what kind of porridge you prefer. Last year, convenience store chain Bokwang Familymart launched the “Achimen Bonjuk” brand in partnership with Bon IF. The company said it has come up with a distinct set of flavors including beef bone soup, garlic chicken, chicken curry, eggs-mushrooms, and chickpea-sweet potato. It boasts that the porridges contain no artificial colors, artificial flavorings, or preservative. 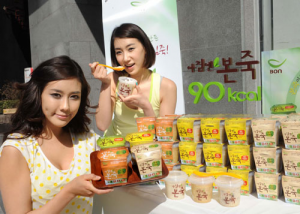 Porridge has been known for centuries as a food that protects your body. (image:Bon IF)

In addition to food processors unveiling new porridge products, there are companies promoting porridge to overseas or foreigners residing in Korea. For example, homegrown espresso coffee chain operator Caffé Bene held a promotional event on the Halloween Day in which it gave away free cups of sweet black bean porridge to foreigners visiting its store in Itaewon. A porridge chain store “Juk Story” with more than 400 locations in Korea is gradually increasing the number of overseas locations, with the first one in the City of Yanji in northeast China in 2007. It has since opened stores in other Chinese cities such as Shenzhen, Shenyang, and Beijing. In December 2011, the company opened the first U.S. location in Virginia, continuing its winning streak overseas.

Porridge has been known for centuries as a food that protects your body. That’s why it is a preferred food for patients or those who have just recovered from medical condition. But these days it is no longer an exclusive property of patients but is widely enjoyed by anyone. As porridge can protect the stomach’s mucous membrane while soothing the stomach weary from indigestion and hyperacid, it is an excellent alternative to a meal with rice or bread. According to the National Health Insurance Service, the incidence of indigestion has increased 5.5 percent a year for five years since 2006. It’s indeed a great opportunity for porridge purveyors small and large.