SEOUL, Oct. 29 (Korea Bizwire) – The “German Moses’ Miracle” video once went viral in South Korea for its miraculous view showing that all cars yielded the right-of-way to an emergency vehicle, which is really hard to witness in Korea.

Refusing to yield the way to fire trucks or ambulances actually hurts response time. The rate of arrival within five minutes for rescue plummeted every year from 64 percent in 2011 to 54.8 percent in 2012 to 52 percent in 2013. It has caused worse situations which were supposed to be better once an ambulance arrived on time. 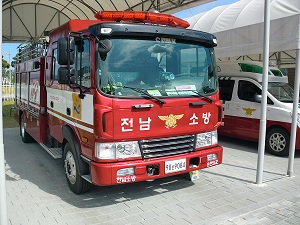 In order to encourage citizens to give up the right-of-way to fire trucks and ambulances, therefore, “My Heart Beats,” a TV reality show program in which celebrities work as volunteer fire fighters aired on SBS-TV, produced a public campaign advertisement, showing a situation in which an ambulance transferring a wounded girl is stuck in traffic as any car wouldn’t give up their way to it.

In accordance with the ad and efforts of the stars in the program, some lawmakers proposed a revised bill last June to urge drivers to make way for emergency vehicles. The revised plan is to increase fines from 20,000 – 50,000 won to 200,000 – 300,000 won to those who don’t yield. The new law is not yet known whether it will be passed.

Not only that, a lot of local fire stations have done simulation training to make citizens recognize the importance of yield and get used to such situations. “Unlike the first training, now many citizens cooperate with the drill. We will do more campaigns to prepare for the real emergency,” said Im Jung-ho, a team leader of Yong-in fire station.

Along with the state’s effort to improve civic consciousness, a driver was fined 50,000 won for its obstructing the path of an ambulance for the first time in Korea. The driver intentionally blocked the right-of-way to the vehicle in Ulsan City. The fine in the same situation is 60,000 won for vans, 50,000 won for sedans and 40,000 for two-wheeled vehicles.