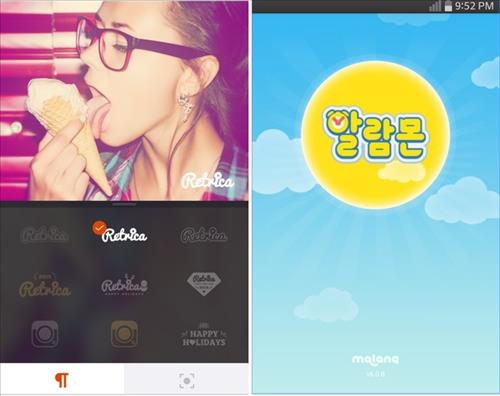 Camera apps or other apps related to pictures or photography are especially popular in Brazil, Mexico, Argentina and other South American countries. (image: Yonhap)

According to industry officials, camera apps or other apps related to pictures or photography are especially popular in Brazil, Mexico, Argentina and other South American countries. Cymera and Candy Camera are two of the camera applications that are popular overseas.

Officials from Google explain the reasons behind the popularity of these apps. “In Latin culture, people enjoy taking pictures with friends when there are gatherings. We expect that the superior editing features and delicate operation of Korean camera apps are behind their popularity.”

In addition, alarm and game applications are also popular among South Americans.

The reason Korean developers were able to succeed is due to the high technical skills that can meet the demand of the rapid increase in smartphone users. The South American market is still in the early stages of application development. Because they lack technology and experience, the speed of development is very slow.

The high market share of the Android operating system makes it easier for Korean developers, as they have plenty of experience in the domestic market, where the market share of Android OS is also high.

Easy instructions, light in volume and corresponding to the local tongue are factors that are common among the apps that succeeded in the South American market.

Officials from Google say that it is important to dominate the market in advance when the market is not mature. “If applications that already gained success in Korea receive interest in the Central and South American markets and efforts are made to localize the applications, entering the international market will not only be a dream.”