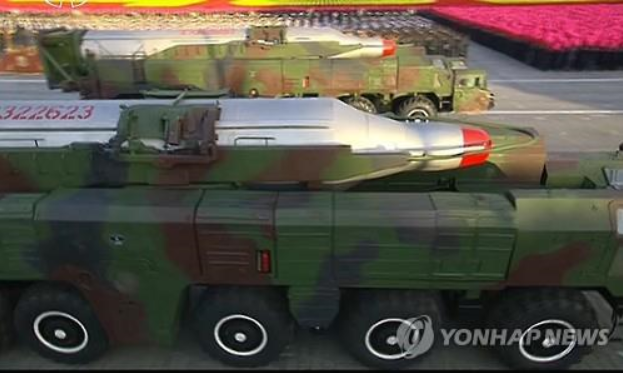 Before the first botched attempt took place on the birthday of North Korean founding father Kim Il-sung, two mobile launcher-loaded Musudan missiles were detected near Wonsan on the east coast.

SEOUL, April 28 (Korea Bizwire) – North Korea fired off what appeared to be its Musudan intermediate-range ballistic missile (IRBM) early Thursday, but the launch seems to have ended in failure in the communist country’s second botched IRBM test in two weeks, a military official said.

The missile appears to be the same model that North Korea tried to launch on April 15, according to the insider.

“The missile, presumed to be a Musudan, was fired around 6:40 a.m. from the vicinity of Wonsan, but it appears to have crashed a few seconds later,” the official said.

“It is highly likely that the launch failed. With that in mind, South Korea and the United States are conducting a detailed assessment,” he said.

Others said the missile seems to have plunged into the coastal area, and the failed launch was caught by a U.S. surveillance satellite.

Before the first botched attempt took place on the birthday of North Korean founding father Kim Il-sung, two mobile launcher-loaded Musudan missiles were detected near Wonsan on the east coast.

The first missile fired earlier in the month exploded a few seconds after liftoff, even before entering its flight phase, reportedly due to engine problems.

The other one had since been on standby before Pyongyang launched it earlier in the day.

“After the first missile launch ended in failure on April 15, we thought they might take some time to fix the defects, but they seem to have decided to go out of their way to attempt a second launch within a short period of time,” the official said.

With a targeted range of 3,000-4,000 kilometers, the missiles are designed to reach as far as Guam, where a large number of United States military forces are stationed.

North Korea is believed to have deployed some 50 Musudan missiles since 2007.

North Korea experts said the failed launch may provide greater incentive for North Korea to conduct a nuclear test ahead of the country’s rare ruling party congress set for early May in order to save face.