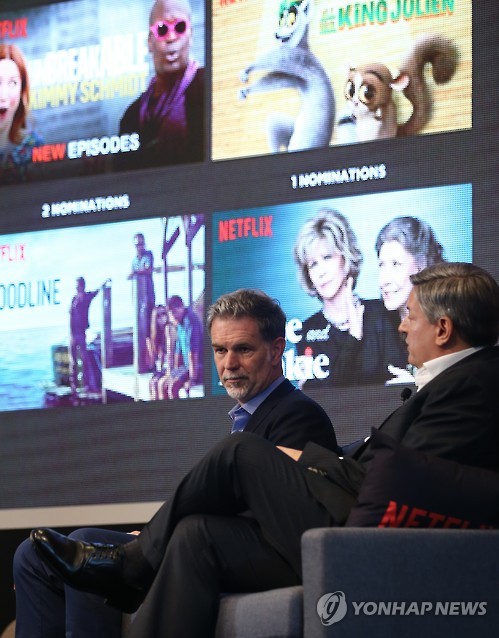 SEOUL, June 30 (Korea Bizwire) – U.S. video service provider Netflix Inc. said Thursday that it will include more locally produced content as part of its efforts to tap deeper into the South Korean market.

Five months after its global rollout in 130 countries, including South Korea, the video streaming provider with more than 81 million subscribers around the globe has struggled to attract local consumers amid tough local competition.

More than 62,000 users in South Korea joined the service in January and 81,000 in February, but the number started to decrease with some 50,000 new subscribers in April, according to data by local polling agency Nielson Korea.

The company said it expanded its production capability first to Mexico and since then to European countries, and has finally expanded to South Korea to capitalize on the Korean Wave, or “hallyu.”

“Our most ambitious project (in South Korea) is that we are making a film ‘Okja’ with director Bong (Joon-ho),” Ted Sarandos, chief content officer for Netflix, said at a press conference in Seoul.

“Okja” is the story about a girl who befriends an animal with whom she travels to South Korea and the U.S. It is currently being filmed in South Korea and set to release in 2017. The company invested US$50 million in the movie.

Netflix CEO Reed Hastings said the company will be able to announce more local projects by the end of the year, without elaborating.

Netflix also said that one of the greatest markets for K-content is China, where the service is currently excluded.

“I know that China means big revenue for K-dramas. We realize that when we continue to look at China as an opportunity,” said Hastings.

The company has failed to enter into the world’s most populous country where content providers often face unique regulatory hurdles.

One of its new series, “Sense 8,” which stars South Korean actress Bae Doo-na, will also be shot in Seoul for its second season, according to Netflix.

Netflix, first launched in 2007 as a mail-order DVD service company, now provides not only streaming services but also produces award-winning original content such as hit political thriller “House of Cards.”

“One great thing about 190 countries is that you get to experience the greatest storytellers of the world and to export (local) content to the rest of the world,” said Sarandos.