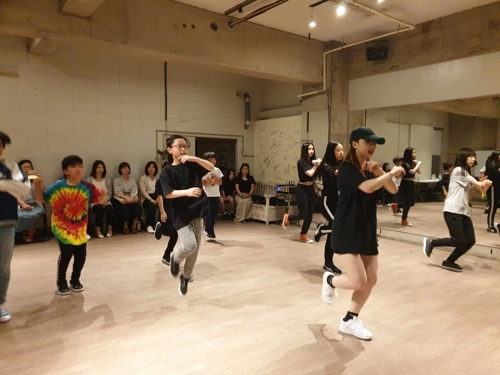 TOKYO, May 14 (Korea Bizwire) — As K-pop band BTS’ latest hip hop song, “Dionysus,” hit the speakers at a small dance studio on a quiet backstreet of Shinjuku district in Tokyo one Saturday morning in May, a group of Japanese boys and girls swung their arms back and forth in sync with the music, their eyes focused and serious.

After the instructor walked the 13 teenagers, including several primary schoolchildren, through the choreography of the song’s chorus, it took only a few repetitions for them to copy its elaborate dance moves while she called out the beat.

Airi Sugiyama, a 19-year-old “freeter” — a person who juggles several part-time jobs — was one of the young trainees in the entry-level K-pop dance class that day. Such youths represent a new generation of people who avidly follow K-pop music in Japan, one of K-pop’s biggest markets.

Her idol is Lisa, the Thai member of sensational K-pop girl band BLACKPINK, and Sugiyama hopes that one day she will debut and perform in the K-pop scene as a foreign artist just like Lisa.

“I like the way the dance highly synchronizes (with the song) when I dance (to K-pop music),” the wannabe star told Yonhap News Agency and other news outlets on the sidelines of the dance class last week.

“I wanna dance like BLACKPINK … and if I become an idol myself, I want to share my own stories with many other people,” she said.

For her first venture toward her dream, she is planning to take part in a global audition in Japan in June run by SM Entertainment, the label for such famous K-pop music bands as Red Velvet and EXO.

Including Sugiyama, 300 people, mostly middle and high school students, are currently enrolled at the dance studio, Maru, 30 percent of them aspiring to become professional K-pop idols.

Many plan to compete in a future season of the Mnet idol competition TV show “Produce,” through which IZ*ONE, a girl band with Korean and Japanese members, was formed and found fame.

“We started in a very small studio but relocated to this studio the year before last as more students flowed in. … As (Japan) experiences a second K-pop boom, many students and people want to learn (K-pop dance),” said the 21-year-old dance instructor, who identified herself as Kyo-kah.

Since South Korea officially lifted import barriers on Japanese pop culture in 1998, a move whose belatedness is attributable to Japan’s 1910-45 colonial control of Korea, the two neighboring countries have rapidly become acquainted with each other’s TV dramas, movies, music and comics.

As Korean TV drama series and K-pop music earned popularity outside of Korea in the early 2000s — a phonomenon called hallyu, or Korean Wave — Japanese consumers were among the first to become loyal fans of Korean TV series and actors such as Bae Yong-joon from the 2002 KBS drama “Winter Sonata.”

This love of Korean pop culture continued to bring a number of Korean actors and bands to the forefront of the Japanese entertainment scene, including TVXQ, which later split into a two-piece band with the same name and the three-member JYJ.

The robust cultural bridge was, however, brought down as Tokyo’s territorial claims to the South’s easternmost islets of Dokdo intensified to poison the cultural relationship as well. 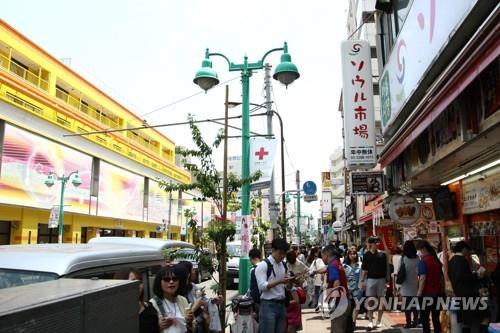 Now, a new army of K-pop stars like BTS, TWICE and BLACKPINK, have rebuilt a young generation of Korean culture fans who are withstanding the diplomatic tension between the two countries.

Even as Seoul and Japan were caught in a diplomatic rift last year over compensation for Japan’s wartime forced mobilization of Koreans as laborers, BTS recorded sales of 5.5 billion Japanese yen (US$50.2 million), the fifth-highest among musical acts in Japan, regardless of nationality.

On back of its phenomenal fame, BTS launched a concert tour of Japanese dome arenas that ran from late last year to early this year, making them the first Korean band to do so and selling 380,000 tickets in the process. This year, the septet will hit the road again in the country.

“The phenomenon surrounding Korean content is really growing even further after K-pop recorded growth of 15-20 percent last year and the year before,” said Hwang Seon-hye, the director of the Korea Creative Content Agency’s Japanese branch.

“This new hallyu boom in Japan is bolstered by young Japanese people in their teens or 20s who care little about the (diplomatic) relationship between the two countries,” she said.

Fully aware of K-pop’s brisk growth in Japan and the significance of the Japanese music market, K-pop acts have valued the neighboring country’s music scene highly.

From 2014 till last year, BTS dropped five studio and compilation albums, including “Face Yourself,” recorded in the Japanese language — the band’s only foreign-language records.

Japan’s content market, the second-biggest in the world in size, is a test bed for K-pop bands seeking to launch their career globally, Hwang said. “If approved in Japan, (a K-pop album) could make it to the world stage.”

As if to prove the growing K-pop boom in Japan, the main streets of the Korean neighborhood in Shin Okubo in the Shinjuku district were bustling with Japanese people and tourists late Saturday morning.

Noriko Sasaki, a 57-year-old government employee and loyal fan of Bae Yong-joon and JYJ, was one of the morning shoppers at a store selling K-pop products in Shin Okubo.

“In the past, those who followed and loved Korean drama series were seniors and older people, but the difference now is that young people are the mainstream consumers of Korean culture here,” she said.

“I didn’t hate Korea, but after coming to know Yon-sama, I developed an affinity for Korea,” she said, referring to Bae’s Japanese nickname. “I take politics and culture separately. (Despite the diplomatic difficulties between Seoul and Tokyo) I like Korean culture,” she added.