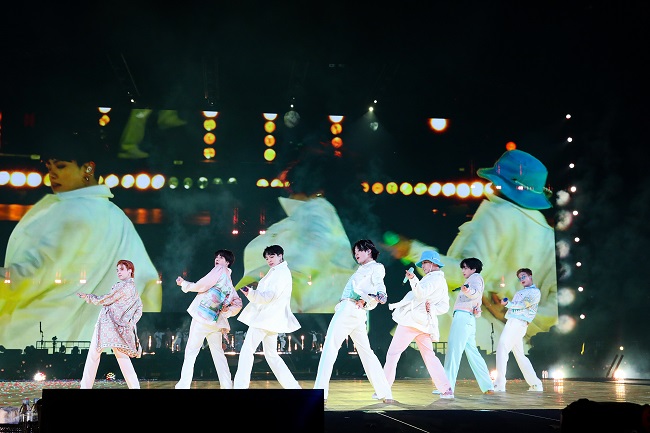 This photo, provided by Big Hit Music, shows BTS performing at SoFi Stadium in Los Angeles on Nov. 28, 2021, the second of its four concerts there.

SEOUL, Dec. 1 (Korea Bizwire) — Starting in June of next year, popular figures will be able to demand reparations or remedy if financial damage is incurred by someone illegally using their name or pictures.

The Korean Intellectual Property Office (KIPO) said Tuesday that new legislation including these rules had passed the state council.

While current laws allow for certain remedial actions against such acts based on the constitution or civil law, they are limited to the protection of one’s portrait and name as a personal right, which only allows for a psychological remedy by means of compensation.

In other words, current laws weren’t able to protect against property damages caused by unauthorized use of the portraits or the names of popular athletes or movie stars, allowing the amount of compensation to be much less than the actual damages incurred.

With the new legislation, financial losses caused by illicit use of the portrait and name of a popular figure will be deemed as an act of unfair competition, which is subject to civil or administrative penalties.

It is the first legal basis ever to be established for the protection of the so-called ‘publicity right’, a right held by popular figures to authorize the use of their name or portrait in commercials and other forms of media, the KIPO said.