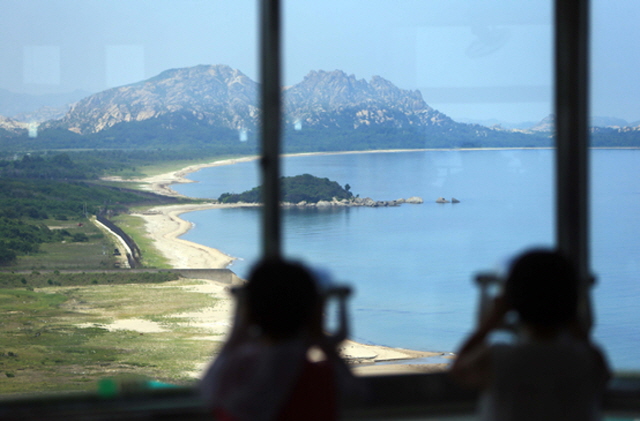 GOSEONG, May 17 (Korea Bizwire) — More than 1,800 visitors have flocked to Military Observatory 717OP (also known as Mt. Kumgang Observator”) that has opened temporarily in time for the spring.

The local government of Goseong County in Gangwon Province announced yesterday that 1,863 guests had visited South Korea’s northernmost military observatory between April 28 and May 13.

Having first opened its doors to the public in time for autumn visitors in 2016, the observatory has remained opened during the spring and autumn periods.

It was also open for the PyeongChang Winter Olympics in February and the Paralympics in March.

During the five times Observatory 717OP was accessible to the public, it saw a total of 6,881 visitors.

Situated father north than the Unification Observatory, 717OP allows for a birds’ eye view of Gamho, a lake within the DMZ, as well as parts of North Korea.

As the site started to attract more people each year, the local government, in agreement with the military, increased the number of visitors allowed from 40 to 80 a day in autumn 2016 before further increasing the quota to 80 in spring last year and 120 last autumn.

The most recent opening had 160 people visiting per day.

When Mt. Kumgang Observatory was first built in 1992, it was initially fully open to the public. But after 1994, the observatory closed its doors and remained permanently shut, only utilized as a military facility.

“The number of visitors to 717OP is increasing each year,” said one government official. “The visitors this spring seem to have been affected by the conciliatory mood between the two Koreas.”