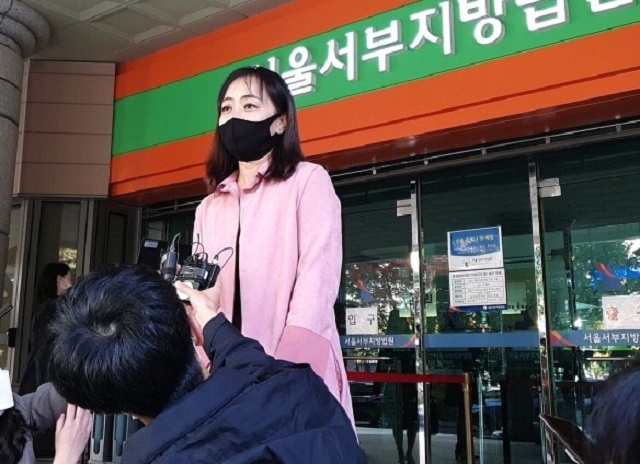 Kang Min-seo, the operator of a website that discloses the information of parents who fail to provide child support, speaks to the press after she was acquitted of defamation charges against a parent in front of the Seoul Western District Court on Oct. 29, 2020. (Yonhap)

SEOUL, Oct. 29 (Korea Bizwire) — The operator of a website that exposes the identity of parents refusing to pay child support was found not guilty of defamation by a Seoul court on Thursday.

The Seoul Western District Court acquitted Kang Min-seo of defamation charges over disclosing a man’s personal information on the website, Bad Parents, that she created in 2018.

The site publicly shares information, such as the name, age, residence and workplace, of parents who have been uncooperative in providing child support after divorce.

In June last year, she disclosed on the website the identity of the plaintiff, who allegedly failed to provide child support for around 20 years.

The man filed a criminal complaint against her, arguing that his reputation was damaged by the website’s false accusation.

The prosecution had given her a summary fine of 1 million won (US$883) for posting some false information about the man, but she demanded she be judged at court.

In the ruling on Thursday, the court took note that Kang did not intend to defame the man when sharing the post, and that it would have been difficult for her to know that some of the allegations against the man were false.

“The post only emphasized the need for child support, with no trace of anger or personal feelings against the plaintiff,” it said.

The court, however, added that the verdict was based on whether the defendant knew about the false statements, not on the “legality of disclosing personal information.”

After the ruling, Kang thanked the court for acknowledging that her writing was not slander but for resolving child support issues.

A legal fight between parents should be the last resort, and the government should play a more active role to resolve child support payment, she added.