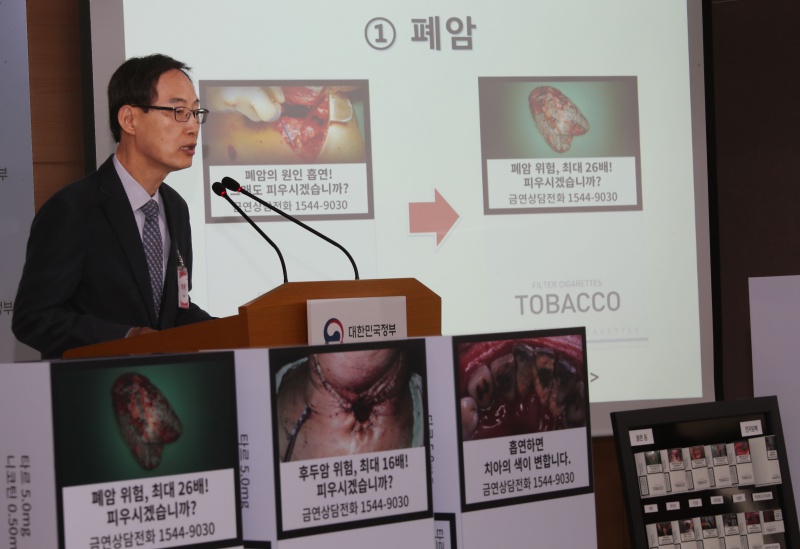 SEOUL, May 16 (Korea Bizwire) — The Ministry of Health and Welfare’s recent decision to enlarge the size of graphic warnings on cigarette packs is facing strong opposition from the Korea Tobacco Retailer Association (KTRA).

Along with South Korea, a number of countries oblige tobacco companies to cover more than 65 percent of cigarette packages with disturbing images and warnings to discourage people from smoking.

Some of these images depict the side effects of smoking, like premature aging skin and diseased body parts such as neck tumors and discolored teeth.

The graphic warning regulation was put into effect in 2016, and has required tobacco companies to change warning text  and images every two years to maintain awareness of the deadly risks of smoking.

The ministry is also reviewing the possibility of adopting plain tobacco packaging that would remove all brand imagery from cigarette packs. This regulation would standardize the design of all cigarette packs to display the brand name in a standard color, position, and font with the same background color.

The KTRA announced its stand on the health ministry’s plan regarding pictorial warnings on cigarette packs and called it a “unilateral decision” on May 15.

According to the KTRA, the health ministry formed the Graphic Warning Label Committee and held meetings frequently, but tobacco sellers were never taken into consideration despite the impact that the decision will have on sales.

“It was a hasty decision to put cancer cell images even on heated tobacco refill packages for smokeless cigarette devices,” said the KTRA. “The health ministry has made an undemocratic and senseless move.”

Bang Gwang-hyuk, the chairman of the KTRA, said, “This inconsiderate and brutal policy causes defamation for those of us who sell cigarettes for a living.” He also demanded that the draft of the detestable images that the health ministry proposed be modified.