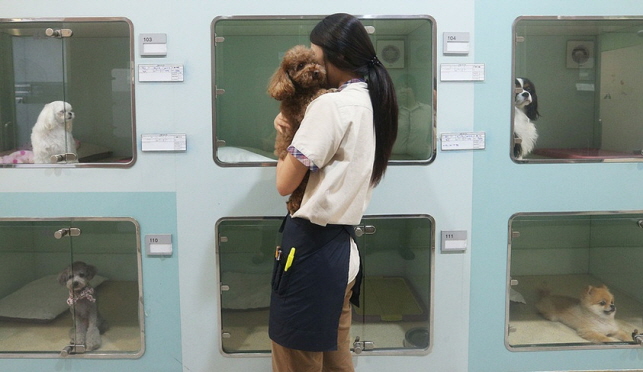 Some customers disappear after bringing their pets in for styling, while others fail to show up even after the accommodation period has expired. (Yonhap)

SEOUL, Oct. 23 (Korea Bizwire) — Pet care centers are facing difficulties due to pet owners failing to show up after entrusting their pets to them.

One online forum of pet care centers in South Korea has regular complaints from administrators that customers had disappeared after leaving their pets at the center.

Some customers disappear after bringing their pets in for styling, while others fail to show up even after the accommodation period has expired.

Even if the pet care center manages to get in contact with the ‘missing’ customers, many of them make excuses to avoid returning to the store to pick up their pet.

This act, however, does not qualify as animal harassment or endangerment since current legislation fails to deem the practice of leaving pets behind at pet care centers as abandonment.

Even if the center tries to sue the customer for fraud over care service charges, it needs to prove the pet owner’s intent, which is hard to do.

“We tried calling the police, but they said it would be better to file a civil suit instead,” said one owner of a pet care center.

As a solution, experts suggest that a contract be signed between the pet care center and the customer before the pet arrives.

The contract can include a provision that explicitly defines the act of failing to show up after the check-out date as an act of abandonment.

“It’s a penalty clause. If someone breaks the rule, they pay for it,” said Kim Dong-hun, an attorney specializing in animal law. “It is important to stipulate these provisions in a contract to minimize the risk.”