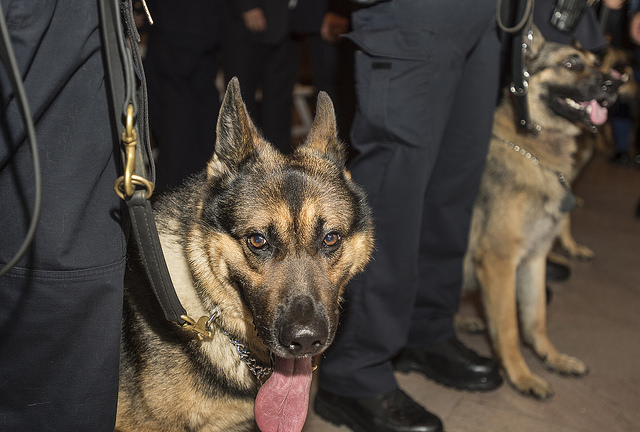 Korean police are going to get somatic cells from qualified K-9 dogs at home and abroad. (image: Metropolitan Transportation Authority of the State of New York /flickr)

SEOUL, Aug. 20 (Korea Bizwire) – Police plan to clone a superior breed of dogs to use them as police dogs.

The National Police Agency said on August 18 that it has set aside 1 billion won, or about US$980,000, in its budget to duplicate 40 K-9 dogs after a year of preparation. “Only South Korea has cloning techniques to replicate dogs,” an officer in the agency said. “We will select a superior species of dogs suitable for police missions to have the best police dogs ever,” he added.

The police have 130 dogs including German Shepherd, Belgian Malinois and Labrador Retriever for searching for drugs and explosives or looking for criminals, none of whom have shown highly exceptional talents.

While an exceptional K-9 dog in other developed countries is valued at more than 100 million won, the Korean police dog is valued at about 5 million won. Moreover, only 20-30 percent of the dogs have fulfilled their missions.

That is why the police are going to get somatic cells from qualified K-9 dogs at home and abroad. They will also secure somatic cells of other breeds that they do not have such as Doberman Pinscher, Bloodhound and Dogo Argentino, all of which are especially good at searching for explosives and at guarding.

Two of the four institutions, the College of Agriculture and Life Science at Chungnam National University, and the Sooam Biotech Research Center, positively respond to the police’s suggestion.

The Sooam Biotech Research Center, whose chief technical officer is Hwang Woo-seok, has already cloned a police dog ‘Queen’ to offer five reproductions to the police.

Cloned dogs are planned to be sent to the police squad and special forces. The police also plan to build a system for producing and managing duplicated dogs.

One thought on “Police Plan to Clone Exceptional K-9 Dogs”