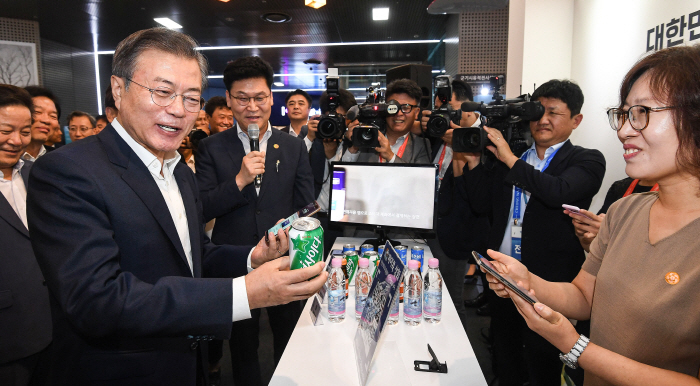 The event at Seoul City Hall was held with the goal of vitalizing Internet-based banks.

Moon participated in the conference which also showcased various examples of innovative fintech practices and listened to the voices of both experts and consumers in the field of Internet-based banking.

The president was especially interested in a viable situation involving an entrepreneur who was able to get a low interest loan from an Internet bank and wire the money to his daughter studying abroad with a click of a button.

President Moon said that he was able to experience for himself the actual instances in which innovations in the banking sector had led to convenience for members of the public requiring such financial services.

The South Korean president continued on to other booths set up at the conference displaying different services made possible by innovations in banking.

One of the booths explained how bank clients could set up a new bank account by providing only basic personal details without the hassle of having to pay a visit to a bank.

At yet another booth, Moon used a QR code with an 800-won value to buy a drink on the spot. With just a single smartphone app alone, anyone can use a QR code to make payments.

When Moon was told that the payment system directly links consumers with vendors without the need of a middleman, the president noted that the service could possibly lower credit card fees for small business owners.