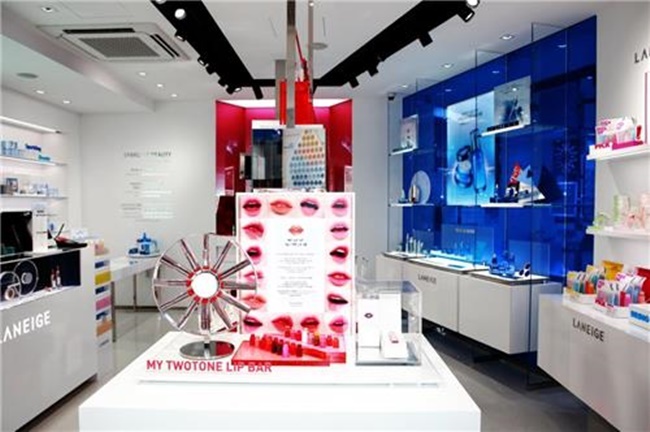 The new study published yesterday asked around 4,000 Chinese women aged between 20 to 39, who are in the top 70 percent income bracket, about their makeup style and brand preferences. (Image: Yonhap)

The new study published yesterday asked around 4,000 Chinese women aged between 20 to 39, who are in the top 70 percent income bracket, about their makeup style and brand preferences.

Over 40 percent of the respondents said they preferred South Korean beauty products, compared to 22 percent who preferred European cosmetics brands.

Among South Korean brands, Laneige (38.4 percent) was the most popular for Chinese beauty shoppers, while Innisfree (35.3 percent) followed close behind.

Other popular brands included Sulwhasoo, the Face Shop and Mamonde.

Nearly 90 percent of the respondents said they planned to buy a South Korean beauty product in the near future.

The study also revealed that the makeup routine of Chinese women has become much more complex than seven years ago, with the average woman having a 12-step makeup regimen.

Nearly a quarter of the Chinese women surveyed said they apply makeup in 17 steps, with seven of them being part of their skin care routine.

When the survey was conducted in 2010, the average nighttime skin care routine for Chinese women only consisted of 2.7 stages, but the number doubled in 2017.

Of the respondents, 70 percent said they used a facial mask pack at night, with an additional 14 percent saying they used more than two different types.

Shopping patterns and makeup styles varied widely depending on the region.

Consumers living in major cities spent an average of 1.65 million won ($1,456) per year with a tendency to shop from a variety of brands, unlike those living in medium-size cities who tended to follow advice from beauty experts and have a narrower range of brands to shop from.

Yun Hye-jin, the director at Kantar TNS Korea, said, “Although preference for South Korean beauty products among Chinese consumers is still growing, competition from local brands is beginning to pose a threat to South Korean companies.”

Yun added that as a result, South Korean cosmetics companies are now being “urged to study Chinese consumers thoroughly and understand regional differences more carefully” in order to continue their growth in the Chinese market.