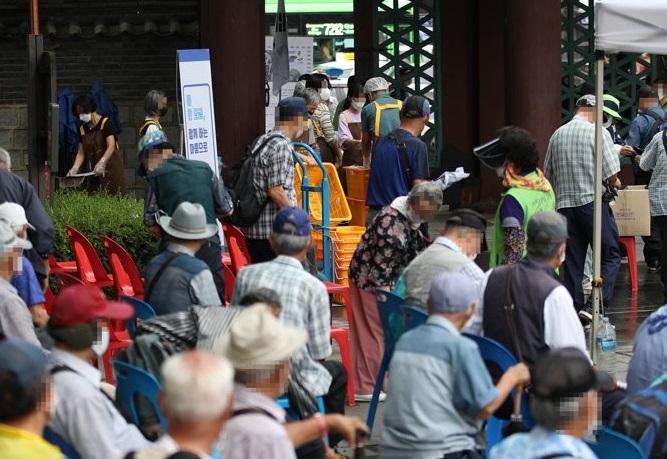 Senior citizens wait for the delivery of meals offered for free at a park in Seoul on Aug. 2, 2021. (Yonhap)

SEOUL, July 1 (Korea Bizwire) — A recent public opinion survey showed that those who support the idea of raising the age hurdle for offering free access and basic pensions for seniors outnumber those who oppose it by a significant margin.

Embrain Public, KSTAT Research, Korea Research and Hankook Research jointly conducted a National Barometer Survey of 1,002 men and women in South Korea over 18 years of age, in which 62 percent supported the idea of raising the minimum age of what qualifies as ‘senior’ from 65 to 70 years old.

Asked about extending the retirement age from 60 to 65, 84 percent supported the idea while 13 percent did not.

When asked about robust accommodation and acceptance of foreign immigrants, 43 percent supported the idea while 45 percent did not.

As for making changes to the national pension system to take some of the burden off of future generations, 48 percent agreed while 45 percent did not.

Another 63 percent were in favor of providing pensions to government employees, soldiers and private school staff on the same line as national pensions while 26 percent disagreed.