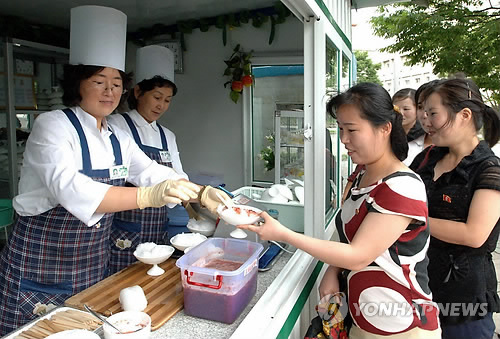 SEOUL, July 15 (Korea Bizwire) – Residents in Pyongyang are enjoying patbingsu, or shaved ice with red bean and fruit, to overcome the summer heat. According to the North Korean Central News Agency (KNCA), local residents are attracted to the cool taste, and are flocking to patbingsu cafes on street corners around Pyongyang. As the treat gains explosive popularity, authorities are making more ice, fruit juice and jam to meet the soaring demand for patbingsu.

Patbingsu was first introduced to North Korea in 2011 by the order of then supreme leader Kim Jong-il. Other iced deserts like patbingsu with strawberry and patbingsu with tomato are selling like hotcakes, according to the KNCA. A resident of Pyongyang’s central district was quoted as saying, “The summer heatwave is instantly cooled by patbingsu. In summer, patbingsu is the best!”