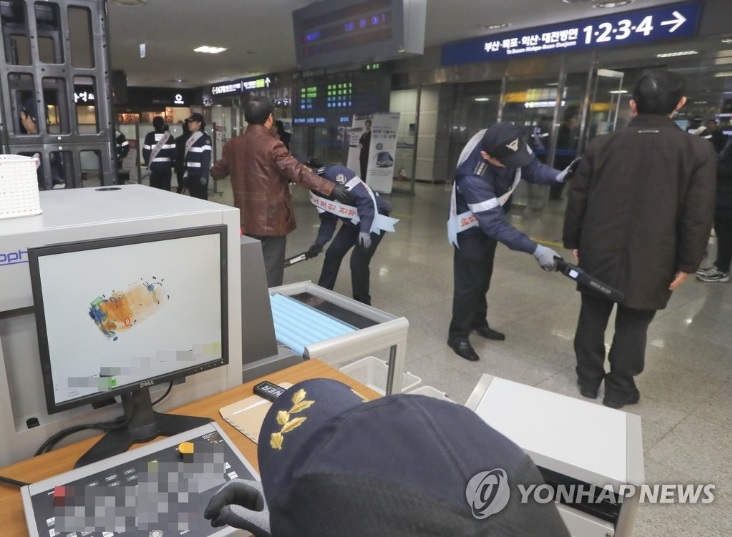 Now going on ten months, the supposed random searches and their methods are brewing an undercurrent of discontent. (Image: Yonhap)

SEOUL, Jul. 5 (Korea Bizwire) — As a preventative measure against terrorist attacks, the Ministry of Land, Infrastructure and Transport launched new security policies last August. At major railway terminals across the country, travelers are selected at random and they and their luggage is searched by security personnel. Now going on ten months, the supposed random searches and their methods are brewing an undercurrent of discontent.

Much of the murmuring and muttering is due to the selection criteria of those who are being searched. Although official policy is that travelers are randomly selected, most do not believe that to be the case. It is believed that the policy unfairly targets those who have large pieces of luggage with them, especially large suitcases.

To verify the chatter around the issue, a news publication recently conducted an investigation where it observed travelers who were searched by security personnel at train stations. According to their findings, nearly seven out of ten travelers searched had large suitcases. Furthermore, of the few who did not have suitcases, the majority were carrying large backpacks.

Those searched are generally the ones who feel most aggrieved. One man who was searched said, “Every time I use the train and I’m on a business trip, I get searched. The railroad security personnel use their power to search whoever they want. I was not even told the reason for the search. It’s horrible.”

In response to such complaints, a spokesperson from the Ministry stated that “based on the advice we receive from security experts and the evidence from real-life terrorist incidents, we do search suitcases and large bags more than others.”

When pressed on the allegations that security personnel target Southeast Asian travelers for random searches at a higher rate, the spokesperson refuted the charges of racism. “It is true that we want foreigners to feel like they can also be subject to searches if there are clear grounds to do so. However, these allegations of security personnel targeting travelers based on race are completely false.”

As of now, the security measures have uncovered a total of four travelers carrying illicit items, three of whom were certified to carry them. So far, only one individual has been prosecuted for transporting dangerous goods.