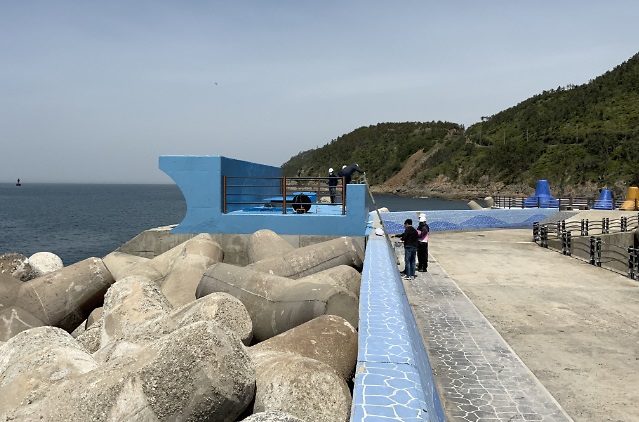 This photo provided by the Ministry of Oceans and Fisheries shows the wave energy demonstration plant in Jeju Island.

SEOUL, Nov. 16 (Korea Bizwire) — The government has launched a drive to demonstrate wave power generation using the force of waves hitting a seawall.

The Ministry of Oceans and Fisheries on Tuesday held the completion ceremony for a 30-kilowatt-class demo plant designed to generate electricity using the force of waves hitting a seawall in Chuja Island, north of the southern resort island of Jeju.

Given that Chuja Island has low demand for electricity, the demo plant has a modest capacity of 30 kW. The capacity, however, can be extended further depending on the area of installation.

Structural costs for the demo plant were reduced by attaching the power generator directly to the seawall, with the facility designed to endure rough waves.

With a sophisticated electric power control technology, the demo plant can generate power even with small waves and is connected to an energy storage device to store and supply the produced electricity stably to the power grid.

At present, only a handful of countries including the U.S. and Britain possess wave power generation technology.