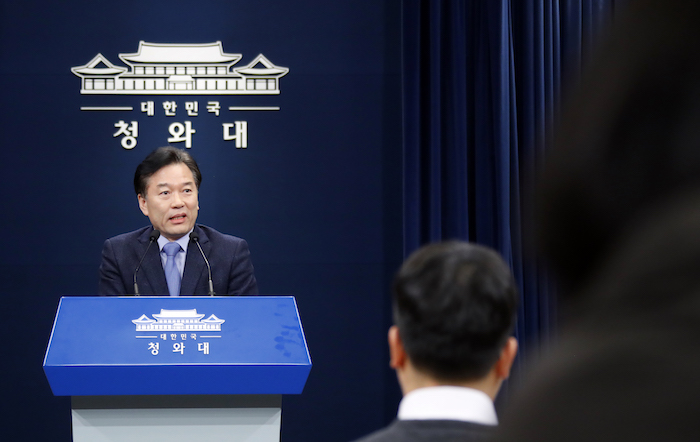 Jung Tae-ho (L), senior secretary to the president for job creation, speaks in a press conference held at the presidential office Cheong Wa Dae in Seoul on Feb. 8, 2019. (Image: Yonhap)

“We have hopes that at least one or two more can be realized within the first half of the year,” Jung Tae-ho, a senior secretary to the president for job creation, said during a press conference at Cheong Wa Dae.

The remarks came about a week after the local government of Gwangju and top automaker Hyundai Motor Group signed an investment deal to jointly build and manage a new automobile production facility in the city located some 330 kilometers south of Seoul.

The first new auto plant to be built here in 23 years will employ up to 10,000 new workers, who will be paid an average annual salary of 35 million won (US$31,152), less than half of the average 80 million won earned by their industry peers.

Such low salaries are the key element of the brand new type of joint venture in which the workers will instead be compensated with various financial and administrative support from the local government, making up for their reduced salary.

“(The new) Gwangju-type jobs will mark a very important, historic turning point in our move toward a nation of innovative employment,” the president said while attending the signing ceremony for the Gwangju-Hyundai deal last Thursday.

“It will also be a chance for the auto industry to innovate. A new car plant will be built in the country for the first time in 23 years. It may also mark an occasion for other manufacturing facilities that moved overseas to return,” he said.

Jung, the presidential secretary, said the new auto plant in Gwangju may begin production as early as 2021.

He said the government was pushing to create the new type of jobs in other parts of the nation, such as Gunsan and Gumi, both homes to automaking facilities.

“It is an important solution to revitalizing our local economies facing difficulties that will also provide a new breakthrough for our national economy,” Jung said.