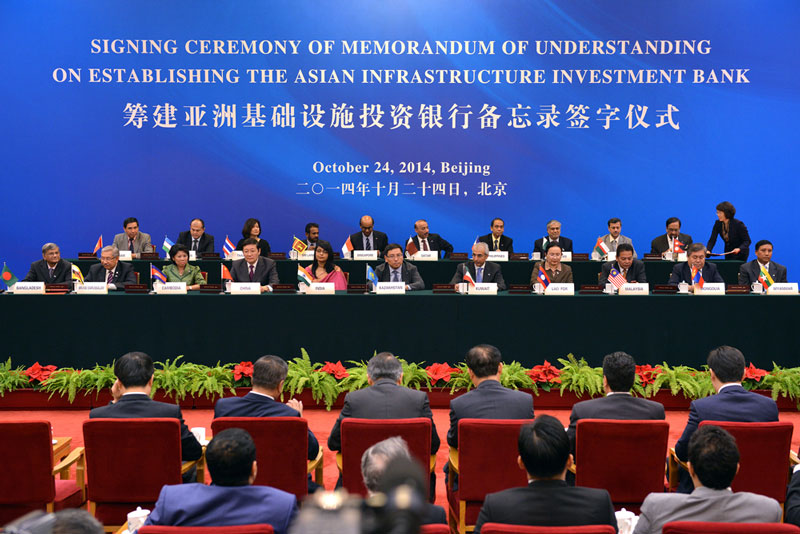 The Memorandum of Understanding on Establishing the Asian Infrastructure Investment Bank was signed in Beijing last year. (image: AIIB)

South Korea’s expected stake in the AIIB was lowered to between 3 percent and 3.5 percent as Russia, which is part of the World Bank and the Asian Development Bank (ADB) as a European member, joined the AIIB as an Asian member, the source said on the condition of anonymity.

“Russia has been categorized as an Asian member in the AIIB,” said the source who was involved in this week’s fourth round of preparatory meetings in Beijing to discuss the articles of agreement and other pending issues for the Chinese-led lender.

The source said South Korea’s stake in the AIIB is “likely to be at the level of 3-3.5 percent.”

South Korea and 56 other economies became founding members of the AIIB, which is seen as a potential counterbalance to U.S.-led multilateral lenders such as the ADB and the World Bank.

They will hold another round of meetings in Singapore next month before signing the final “Articles of Agreement” for the AIIB in June.

China has offered US$50 billion to the bank, which is expected to start operation by the end of this year, with other member countries expecting to increase the total funding to $100 billion.

According to Chinese media reports, the AIIB’s Asian members could have 75 percent of the voting rights, while the remaining 25 percent would go to non-Asian members.